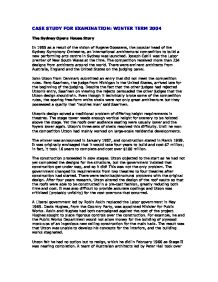 CASE STUDY FOR EXAMINATION: WINTER TERM 2004 The Sydney Opera House Story In 1955 as a result of the vision of Eugene Goossens, the popular head of the Sydney Symphony Orchestra, an international architectural competition to build a new performing arts centre in Sydney was launched. Joseph Cahill was the Labor premier of New South Wales at the time. The competition received more than 234 designs from architects around the world. There were eminent architects from Australia, England and the United States on the judging panel. John Utzon from Denmark submitted an entry that did not meet the competition rules. Eero Saarinen, the judge from Michigan in the United States, arrived late for the beginning of the judging. Despite the fact that the other judges had rejected Utzon's entry, Saarinen on viewing the rejects persuaded the other judges that the Utzon design should win. ...read more.

The construction proceeded in slow stages. Utzon objected to the start as he had not yet completed the designs for the structure, but the government insisted that construction get under way, and so it did! This was not the only problem. The government changed its requirements from two theatres to four theatres after construction had started. There were technical/structural problems with the original design. After four years research, Utzon altered the design of the roof vaults so that the roofs were able to be constructed in a pre-cast fashion, greatly reducing both time and cost. It was also difficult to provide accurate costings and Utzon was criticised (probably unfairly) for the cost overruns that occurred. A Liberal government led by Robin Askin replaced the Labor government in May 1965. ...read more.

However, the inside of the building is considered by many to be pedestrian and certainly not to the standard of the outside. Also the departure of Utzon and the appointment of local architects undoubtedly delayed the completion of the opera house and dramatically increased its costs. The Sydney Opera House was officially opened by Her Majesty Queen Elizabeth II on 20 October 1973. In 1998 the New South Wales Labor government approached Utzon to oversee planned renovations to the building. Premier Bob Carr offered Utzon the final say on all design principles in the 10 year, $66 million renovations contract. Particular reference was made to the need to upgrade the acoustics of the two main theatres. It is apparent from the size of the budget that the government does not intend to revert to Utzon's original plans for the interiors. Source: Robbins S, P, Bergman R, Stagg I, & Coulter M 2003, Foundations of management, Pearson Education, Frenchs Forest ...read more.