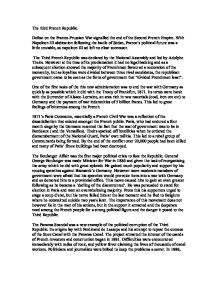 The third French Republic. Defeat on the Franco-Prussian War signalled the end of the Second French Empire. With Napoleon III abdication following the battle of Sedan, France's political future was a little unstable, as napoleon III ad left no clear successor. The Third French Republic was declared by the National Assembly and led by Adolphe Theirs. However at the time of its proclamation it had no legal backing and as a subsequent election showed the majority of Frenchmen favoured a restoration of the monarchy, but as loyalties were divided between three rival candidates, the republican government came to be seen as the form of government that "divided Frenchmen least". One of the first tasks of the this new administration was to end the war with Germany as quickly as possible which it did with the Treaty of Frankfurt, 1871. Its terms were harsh with the Surrender of Alsace-Lorraine, an area rich in raw materials (coal, iron ore etc) ...read more.

attracted and the desperate need among the French people for a strong political figure and the danger it posed to the Third Republic. The Panama Scandal was a new example of the political corruption of the Third Republic. Its origins lay with Ferdinand de Lesseps and his attempt to repeat the success of the Suez Canal with the Panama Canal. The project attracted the interest of thousands of French investors and construction began in 1881. Difficulties were encountered immediately with miles of rock, and yellow fever claiming the lives of thousands of canal workers. Politicians and journalists were bribed to keep the problems a secret. In 1888, the government authorised the sale of lottery bonds to finance the venture but not enough money was raised and the company went bankrupt. A subsequent enquiry revealed tales of bribery, secrecy and corruption. Several prominent parliamentarians and Jewish financiers were implicated. The Republican regime was accused of being incurably corrupt and in the ensuing months and years Jews became the convenient whipping boys for those who had lost their savings. ...read more.

Pope Leo XIII urged Catholic to accept Republican regime and meet their social obligations. In 1901, the Law of Associations was passed which required all members of religious groups to obtain permission for their activities. In 1905 the Law of Separation of Church and State was passed and was greeted by riots. It gave freedom of worship to all religions and withdrew financial support to the French Catholic Church. By 1914, however the Church was beginning to see that freedom state interference and patronage could be beneficial. Overall the Third French Republic faced many challenges form its inception in 1870. it seemed to stagger from one crisis to the next the average tenure of each government being between eight and ten months. However, by 1914 it had in fact outlasted all previous regimes since 1789 and was the form of government that divided Frenchmen least, as it held conflicting political interests together. Included among the strengths of the Republic are the payment of German war indemnities, reorganisation of the army, educational reforms, industrial and foreign progress and considerable colonial expansion. ...read more.