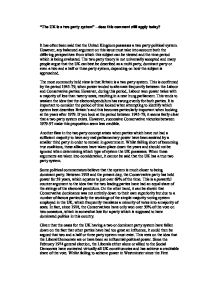 &quot;The UK is a two party system&quot; - does this comment still apply today?

"The UK is a two party system" - does this comment still apply today? It has often been said that the United Kingdom possesses a two party political system. However, any balanced argument on this issue must take into account both the differing perspectives from which this subject can be viewed and the time period which is being evaluated. The two party theory is not universally accepted and many people argue that the UK can best be described as a multi party, dominant party or even a two and a half or three party system, depending on how the subject is approached. The most commonly held view is that Britain is a two party system. This is confirmed by the period 1945-79, when power tended to alternate frequently between the Labour and Conservative parties. However, during this period, Labour won power twice with a majority of less than twenty seats, resulting in a near hung parliament. This tends to weaken the idea that the electoral pendulum has swung evenly for both parties. ...read more.

This is a powerful counter argument to the idea that the two leading parties have had an equal share of the swings of the electoral pendulum. On the other hand, it can be shown that Conservative dominance was not entirely down to their own superiority but due to a number of factors particularly the workings of the simple majority voting system employed in the UK, which frequently translates a minority of votes into a majority of seats. In fact, since 1918, the Conservatives have only won over 50% of the vote on two occasions, which is somewhat low for a party which is supposed to have dominated politics in this country. Given that the cases for the UK having a two or dominant party system have fallen down on the fact that other parties have had too great an influence, it could then be argued that two and a half or three party system must exist. This rests on the idea that the Liberal Democrats are or have been an influential political power. ...read more.

Therefore at local and even devolved level, the UK can be classed as possessing the qualities of a multi party system. However at national level, this idea seems implausible as the vast majority of seats are shared by only two or perhaps three parties and therefore the smaller parties can be considered to have very little effect on the overall political situation. In conclusion, the UK can still best be described as a two party system, provided two considerations are taken into account. The first is that Conservative dominance victories between 1979-97 was not a suggestion of party dominance and that eventually, the swing of the political pendulum will be even for both sides. This can perhaps be seen today with Labour's two landslide victories in 1997 and 2001. The second consideration is that whilst voters are offered a great deal of choice at constituency level, the vast majority of these parties are far too small to have any great impact on the political system and can therefore be considered irrelevant on a national scale and have only regional significance. ...read more.