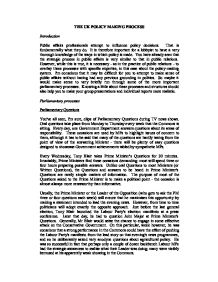 THE UK POLICY MAKING PROCESS Introduction Public affairs professionals attempt to influence policy decisions. That is fundamentally what they do. It is therefore important for a lobbyist to have a very thorough knowledge of the ways in which policy is made. You have already seen that the strategic process in public affairs is very similar to that in public relations. However, while this is true, it is necessary - as in the practice of public relations - to overlay these processes with specific expertise, in this case about the policy-making system. I'm conscious that it may be difficult for you to attempt to make sense of public affairs without having had any previous grounding in politics. So maybe it would make sense to very briefly run through some of the more important parliamentary processes. Knowing a little about these processes and structures should also help you to make your group presentations and individual reports more realistic. Parliamentary processes Parliamentary Questions You've all seen, I'm sure, clips of Parliamentary Questions during TV news shows. Oral questions take place from Monday to Thursday every week that the Commons is sitting. Every day, one Government Department answers questions about its areas of responsibility. These occasions are used by MPs to highlight issues of concern to them, although it has to be said that many of the questions are hardly taxing from the point of view of the answering Minister - there will be plenty of easy questions designed to showcase Government achievements tabled by sympathetic MPs. Every Wednesday, Tony Blair takes Prime Minister's Questions for 30 minutes. Invariably, Prime Ministers find these occasions demanding: most will spend three or four hours preparing possible answers. Unlike oral Questions to most Ministers (or Written Questions), the Questions and answers to be heard in Prime Minister's Questions are rarely simple matters of information. The purpose of most of the Questions asked to the Prime Minister is to make a political point - the occasion is almost always more newsworthy than informative. ...read more.

It is estimated that about one-third of the 400 or so MPs who enter the ballot will have done so with a particular legislative objective. Most of those who enter are more amenable to looking at the situation if they happen to win a place. They then have the option of introducing a piece of legislation already largely drafted and promoted by a lobbyist or pressure group. In 1986, a survey of over 250 interest groups ranging from large bodies such as the TUC and CBI to consumer groups and small charities found that 27% had asked an MP to introduce or sponsor a Private Member's Bill. Since then the number of organisations aware of the opportunities provided by the Private Member's Bill ballot has increased significantly, evidenced by the intensity with which MPs are lobbied running up to and directly after the ballot. The second mechanism by which MPs can introduce legislation is known as the Ten Minute Rule, because on certain days an MP can apply for 10 minutes to outline why a particular Bill should be given a Second Reading. After this speech, only one other MP is permitted to oppose the measure, also for ten minutes. A vote is then taken, and if the Bill is not defeated it moves onto the other stages of the legislative process in the normal manner. This route is more often used to gain publicity than with the serious hope that such a Bill will become law. In fact, it can be a very effective means of winning publicity, as Ten Minute Rule Bills are taken just after Question Time when the House of Commons is fairly full. David Davis, a Conservative MP, has said that these Bills "are a valuable method of allowing backbenchers to express a view on a subject that they feel is important. Normally the intention is to air a controversial subject in prime time. ...read more.

It is therefore very important for lobbyists to ensure that their particular policy proposals are acceptable to a party's leadership if they hope to generate substantial support from within the party. Equally, in the UK the Executive is also part of the Legislature - that is, Ministers are also members of Parliament. The Prime Minister holds that position not because he or she has won a national election but because his or her party has won a series of local elections. So their position depends entirely upon their ability to command majority support within the House of Commons. The converse of this is that the Government will have most of the votes in the House of Commons, so it is unrealistic to expect that it will be easy for MPs to do anything which the Government does not favour. In the US, Congress is frequently dominated by the President's opponents and is perfectly capable of passing laws which the President does not support. In the British Parliament, there is a saying that 'the Opposition can have its say, but the Government gets its way'. So it is more difficult for a lobbyist to successfully promote any measure which the Government is not prepared to accept. This, though, does in practice more refer to large general principles than to details - Governments here tend to be quite willing to accept amendments to their own legislation provided that the amendments do not destroy the basic purpose of the Bills. The Civil Service in the UK is utterly impartial. It has to be, otherwise senior civil servants in the last five years would have been at one point entirely opposed to a national minimum wage and at another time zealous advocates of it; they would have once been passionate defenders of the principle of selection in schools at the age of 11 and now contemptuous of it. The Civil Service is generally very responsive to the needs of the Government, whatever political party is in power. So it is wholly pointless for lobbyists here to brief civil servants on the basis of party ideology. ...read more.