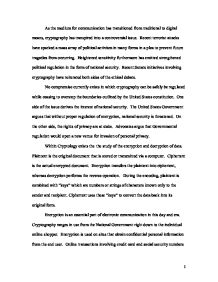 The United States Government argues that without proper regulation of encryption, national security is threatened.

As the medium for communication has transitioned from traditional to digital means, cryptography has transpired into a controversial issue. Recent terrorist attacks have sparked a mass array of political activism in many forms in a plea to prevent future tragedies from occurring. Heightened sensitivity furthermore has emitted strengthened political regulation in the form of national security. Recent Senate initiatives involving cryptography have reiterated both sides of the ethical debate. No compromise currently exists in which cryptography can be safely be regulated while ceasing to overstep the boundaries outlined by the United States constitution. One side of the issue derives the interest of national security. The United States Government argues that without proper regulation of encryption, national security is threatened. On the other side, the rights of privacy are at stake. Advocates argue that Governmental regulation would open a new venue for invasion of personal privacy. Within Cryptology exists the the study of the encryption and decryption of data. Plaintext is the original document that is stored or transmitted via a computer. Ciphertext is the actual encrypted document. Encryption transfers the plaintext into ciphertext, whereas decryption performs the reverse operation. During the encoding, plaintext is combined with "keys" which are numbers or strings of characters known only to the sender and recipient. Ciphertext uses these "keys" to convert the data back into its original form. ...read more.

SKIPJACK's unique structure disallows today's shortcut methods of attack while still providing internal structure to protect national security objectives. With 1 trillion possible keys, SKIPJACK would take 400 billion years to try all of its keys amid today's modern processing power. Key Management Infrastructure (KMI) or Clipper III tried to reform certain aspects to allow private and public keys. KMI relied on certificate authorities to meet government access requirements. However like its antecedent, the KMI proposal was discarded. Despite these events the U.S. Government continues to argue that regulation of cryptography is essential to national security. After the September 11th attacks, Senator Gregg of New Hampshire stated "I am hopeful we can set up a regime that will be fair, that will be subject to the judicial controls necessary to protect the Constitutional rights of people who are law-abiding but will also give our intelligence community the access to the information they need when they know there is somebody out there using encryption technology for the purposes of pursuing a terrorist act in the United States." Although regulation of such encryption could possibly limit some of its uses for illegality, many argue that government has no right to interfere with private digital information. Cryptography is essential for online businesses to provide security to its users. ...read more.

By implementing this act, citizens are protected from the invasions of privacy that could result from the regulation of encryption. Cryptography will remain a controversial issue. Future tragedies involving ethical issues based on encryption will continue to ignite debate on whether cryptography should be regulated. Many mediums across digital firms can be used for both protective as well as criminal activities. Means of security originally used to protect will persistently be twisted by those seeking to harm. The underlying question that remains is whether regulation is more beneficial then deregulation. Personally I believe that the notion of regulating encryption at this phase of the global network is not feasible. Encryption is currently so widely distributed that regulation would hurt more people then it would protect. Regulating such a powerful tool for security in light of a few who abuse its power is unhealthy. The Fourth Amendment is applicable to a home file cabinet just as it is to files within a home computer. It would be elusive to believe that a standardized encryption could possibly be implemented and regulated in a way that eliminates its illegal usages. Although the digital age creates ambiguity within new constitutional mythology and interpretation, our foundational principles should continue to be taken in their original proper meaning. As the United States continues to expand its technological boundaries, it must nevertheless cease to preserve the constitution in its literal context. 1 ...read more.