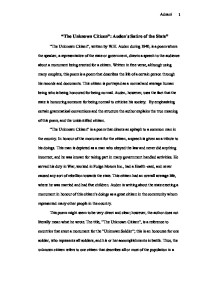 "The Unknown Citizen": Auden�s Satire of the State" "The Unknown Citizen", written by W.H. Auden during 1940, is a poem where the speaker, a representative of the state or government, directs a speech to the audience about a monument being erected for a citizen. Written in free verse, although using many couplets, this poem is a poem that describes the life of a certain person through his records and documents. This citizen is portrayed as a normal and average human being who is being honoured for being normal. Auden, however, uses the fact that the state is honouring someone for being normal to criticise his society. By emphasizing certain grammatical conventions and the structure the author explains the true meaning of this poem, and the unidentified citizen. "The Unknown Citizen" is a poem that directs an epitaph to a common man in the country. In honour of the monument for the citizen, a speech is given as a tribute to his doings. This man is depicted as a man who obeyed the law and never did anything incorrect, and he was known for taking part in many government handled activities. He served his duty in War, worked in Fudge Motors Inc., had a Health-card, and never caused any sort of rebellion towards the state. This citizen had an overall average life, where he was married and had five children. ...read more.

He did not have any rebellious thoughts; therefore, he followed the state when they went to war and when they were at peace. The state is giving a monument to somebody who has never made a difference. Auden writes, "That, in the modern sense of an old-fashioned word, he was a saint," (4) and uses this verse to demonstrate that the government cherishes obedience and not triumph. The word "saint" in the old fashioned-sense means a holy person; however, in the modern sense saint signifies obedience to the state. Thus meaning that this state is honouring a person who is docile. Why would a state do this? The state that is erecting the monument is a state that controls every aspect of their citizen's lives with numbers and statistics. This state is known as a totalitarian state, a state that has complete control over its� citizens. The author demonstrates the type of government the state has by using allusions and using the grammar and the structure to emphasize his point. The name of the "unknown citizen" is "JS/07/M/378", also known as a code or a number. This state recognizes its citizens by a number, and the state further recognizes its citizens with statistics. The government holds records of everything that this citizen has done, but only things that can be documented by paper, such as his position in his work, in war, in his labour Union and so on. ...read more.

By writing the whole poem as an epitaph and making it seem like it is a memorial for someone who deserves it, makes the subject ironic. The reader first thinks that this poem is simply a memorial for a special citizen who did everything right, and in this way Auden is ironic and satirical towards his society. Auden illustrates his irony throughout the whole poem, but one verse and illustrates this use very well is in lines (10-11); "For his Union reports that he paid his dues/ (Our report on his Union shows it was sound)" This line is very ironic, because labour Unions are not traditionally sound according to the government, and since the Union is "sound" it is not really a Union. The sense of this poem depends greatly upon the tone, because literally the poem has a completely different connotation than it does if u considers the tone. The poet has a critical attitude towards this subject and it is clearly demonstrates once the reader analysis the poem. W. H. Auden is a poet who portrays his emotions and feelings through his poetry, and in this certain poem, "The Unknown Citizen", Auden criticises the state. He uses allusions and capitalization to make the reader understand the actual meaning of the poem and by adding the final couplet in the poem, Auden reaches tries to get the reader to think. Auden leaves the reader hanging and makes them think; is our society and government really totalitarian? Or is this how our government will be? ?? ?? ?? ?? 1 Adnani ...read more.