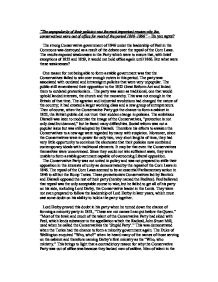 &quot;The unpopularity of their policies was the most important reason why the conservatives were out of office for most of the period 1846-1866&quot;- Do you agree?

"The unpopularity of their policies was the most important reason why the conservatives were out of office for most of the period 1846-1866" - Do you agree? The strong Conservative government of 1846 under the leadership of Peel in the Commons was destroyed as a result of the debate over the repeal of the Corn Laws. The results exposed weaknesses in the Party which were to ensure that, with brief exceptions of 1852 and 1859, it would not hold office again until 1866. But what were these weaknesses? One reason for not being able to form a stable government was that the Conservatives failed to win over enough voters in this period. The party was associated with outdated and intransigent policies that were very unpopular. The public still remembered their opposition to the 1832 Great Reform Act and linked them to outdated protectionism. . The party was seen as traditional, one that would uphold landed interests, the church and the monarchy. This was not enough in the Britain of that time. ...read more.

Peel believed that repeal was the only acceptable course to take, but he failed to get all of his party on his side, including Lord Derby, the Conservative leader in the Lords. They were not even prepared to follow the leadership of Lord Derby in later years, which must cast some doubt on his ability to hold a the party together. Lord Derby proved this doubt in his party when he turned down the chance of forming a minority party in 1851, "These are not names I can put before the Queen." "Most of the brain and much of the talent of the Conservative Party had sided with Peel, which lends substance to the appellation which the Radical, John Stuart Mill, used when he called the Conservatives the 'Stupid Party'." This was demonstrated when the Tories had the chance to form a minority government again. The Duke of Wellington enquired "Who, who?" ...read more.

For the period 1846-1852 the Whig Party, under the leadership of Russell wasn't doing very well, but the Peelites were a lot more popular with the public than the main rump of the Tory party. This still left the Tories with a chance of absorbing the Peelites back into the party. It was not until 1853 that the Whig-Peelite Coalition came into prominence. This made getting into office even harder for the Conservatives as although the Whig Party were relatively weak recruiting the Peelites had given them some much needed security. The Tories also tried on many occasions to recruit Gladstone back into the Tory party, but there was such intense rivalry between Disraeli and Gladstone that this never stood a chance. The second problem came with the Willis Tea Room meeting of 1859. This marked the beginning of new coalition party, the Liberals. This new party included the Whigs, the Radicals, the Irish MP's and the Peelites, creating a strong party and leaving no one for the Tories to form an alliance with in Parliament. ...read more.