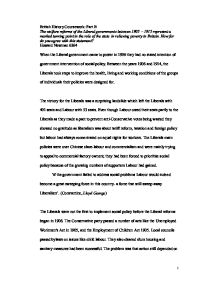 The welfare reforms of the Liberal governments between 1905 - 1915 represent a marked turning point in the role of the state in relieving poverty in Britain. How far do you agree with this statement?

British History Coursework: Part B The welfare reforms of the Liberal governments between 1905 - 1915 represent a marked turning point in the role of the state in relieving poverty in Britain. How far do you agree with this statement? Howard Newman 6364 When the Liberal government came to power in 1906 they had no stated intention of government intervention of social policy. Between the years 1906 and 1914, the Liberals took steps to improve the health, living and working conditions of the groups of individuals their policies were designed for. The victory for the Liberals was a surprising landslide which left the Liberals with 401 seats and Labour with 53 seats. Even though Labour owed their seats partly to the Liberals as they made a pact to prevent anti-Conservative votes being wasted they showed no gratitude as liberalism was about tariff reform, taxation and foreign policy but labour had always concentrated on equal rights for workers. The Liberals main policies were over Chinese slave-labour and commercialism and were mainly trying to appeal to commercial factory owners; they had been forced to prioritise social policy because of the growing numbers of supporters Labour had gained. 'if the government failed to address social problems Labour would indeed become a great sweeping force in this country- a force that will sweep away Liberalism'. ...read more.

The Booth and Rowntree reports had shown that poverty was often not due to personal failings and that in fact it was impossible for some people to lift themselves out of poverty. This was a shift in belief which was also backed up by scientific reports such as Booth and Rowntree who provided cold statistics to back up their arguments. New Liberalism, however, reflects change but at the same time smacks of continuity. In the case of the Old Age Pension Act of 1908 it emphasises this concept of the 'deserving' poor because this pension was a non-contributory based, those eligible were paid 5 shillings per week which was collected at the post office. Old age pensions were not available to those still collecting out relief, drunks or ex-convicts. It at first imposed on the elderly means and character tests not far removed from the Old Poor Law. The concept of deserving and undeserving poor remained. Workers who had been fired as a result of misconduct lost all benefits. Victorian moral ethics were still being upheld. Unemployment Insurance covered only those with 'high-risk' jobs (building, shipbuilding and iron founding) therefore many of the poor found they simply did not qualify for insurance and their families and they were still at risk of poverty or the workhouse. The third set of reforms the Liberals introduced endeavoured to deal the problems of sickness, injury and unemployment. ...read more.

The growing strength of the Labour Party in urban local government also had a large part to play in the Liberals taking action as they would wish to try and secure urban votes. Questions must be asked about the significance of Liberal actions during this period. For example they marked a turning point in the treatment of the poor emphasising the states acceptance of responsibility, but they did not embrace everyone, they did not work as a whole and the poor law did not disappear. The Liberal actions were limited, and almost immediately faced pressure for change. Their effectiveness is made difficult to judge because of the beginning of World War One. The war created the need for further intervention from the government in social matters and the influence of the Labour Party increased. Fear of post-war revolution influenced the wartime government in making plans for post-war reconstruction. Both wars seemed to create a sense of 'obligation' and responsibility on the side of the government for those who had suffered. Substantial social policy would have been expected whether the Conservatives or Labour won the election in 1945. And, at the end of the war, intervention was greatly extended. Labour pushed forward the idea of central government intervention at a local level and benefits to the whole community. This would seem to show permanence and despite its limitations the Liberal reforms are undoubtedly the beginning of the modern welfare state. ...read more.