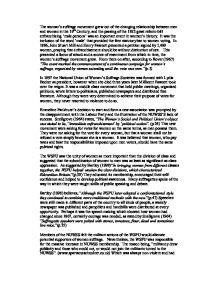 The woman's suffrage movement grew out of the changing relationship between men and women in the 19th Century, and the passing of the 1832 great reform bill enfranchising 'male persons' was an important event in women's history.

The woman's suffrage movement grew out of the changing relationship between men and women in the 19th Century, and the passing of the 1832 great reform bill enfranchising 'male persons' was an important event in women's history. It was the inclusion of the word 'male' that provided the first statutory bar to women voting. In 1886, John Stuart Mill and Henry Fawcett presented a petition signed by 1,499 women, praying that enfranchisement should be without distinction of sex. This presented a focus of attack and a source of resentment from which in time, the women's suffrage movement grew. From there on after, according to Rover (1967) "The event marked the commencement of a continuous campaign for women's suffrage, organised by women extending until the vote was won."(p.5) In 1897 the National Union of Women's Suffrage Societies was formed with Lydia Becker as president, however when she died three years later Millicent Fawcett took over the reigns. It was a middle class movement that held public meetings, organised petitions, wrote letters to politicians, published newspapers and distributed free literature. Although they were very determined to achieve their purpose of votes for women, they never resorted to violence to do so. Emmeline Pankhurst's decision to start and form a new association was prompted by the disappointment with the Labour Party and the frustration of the NUWSS'S lack of success. Snellgrove (1964) states, "The Women's Social and Political Union's object was stated to be, "immediate enfranchisement' by 'political action". (p.24) This new movement were asking for votes for women on the same terms, as men possess them. ...read more.

According to Bartley (1998)"As a consequence Britain might face decline and invasion because women favoured peace rather than fighting". (p.20) By 1905 the media had lost interest in the struggle for women's rights. Newspapers rarely reported meetings and usually refused to publish articles and letters written by supporters of women suffrage. The WSPU decided to use different methods to obtain the publicity they thought would be needed in order to obtain the vote. Christabel Pankhurst and Anne Kenney attempted to disrupt a Liberal Party meeting, the couple deliberately got arrested and then went to prison rather than pay the fine. The action worked and the WSPU obtained a dramatic increase in its membership, As suggested by Snellgrove (1964) "Christabel knew she had changed the women's fight."(p.27) Journalists realized that suffragettes were news. Mrs Fawcett, the leader of the believers in the old methods, saw this too, for she wrote of some other girls that went to prison, Snellgrove states, "I feel the action of the prisoners has touched the imagination of the country in a manner quieter methods did not succeed in doing."(p.28) Whether right or wrong, useful or useless, such tactics made girls join the WSPU. Militancy had made woman suffrage newsworthy and this fact was of real importance. Morgan (1975) states, "The non-militants had never been able to rouse general interest among voters."(p.65) While women were in prison serving their sentences, large numbers of women went on hunger strikes as a protest against unfair detention and again to gain publicity. The Government decided to have them forcible fed by a method sometimes used on lunatics. ...read more.

Asquith's prejudice against woman suffrage almost certainly aggravated his short-sightedness on electoral reform, and that, in turn, contributed to the failure of 'new Liberalism' and the rise of the labour party. The WSPU did symbolize the recognition of the fact that it would be difficult for liberals thereafter to deal with suffrage matters at all without dealing with woman suffrage. According to Morgan (1975) "It is clear that the key variable within the suffrage movement was the WSPU."(p.158) Without its eruption into politics after 1906, the suffrage question would not in Balfour's words, 'have secured a place for itself in the swim'. It is still most unlikely that without militancy, suffrage would have been given active cabinet consideration far less cabinet approval. Their early work helped the cause, for they gained national publicity for an almost forgotten subject. Their activities filled the newspapers at the time and they are remembered today. Morgan (1975) states, "The Pankhursts had exploited the cheap press very successfully." (p.160) Snellgrove (1964) argues, "The women's cause had gained a champion on the day Mrs Pankhurst founded the WSPU."(P.24) The suffragettes demanding the rights of full citizenship understood the importance of women working together in a woman only organisation, developing supportive friendship networks, and sharing a sense of sisterhood. This feeling of sisterhood united all of the women, and was the backbone of the strength of the movement. Snellgrove (1964) believes, "Everyone would agree that they were courageous and sincere."(p.45) The Pankhurst's activities filled the newspapers at the time, and they are still remembered today. Their courage, bravery and faith, particularly when enduring repeated imprisonment and the torture of forcible feeding, remain an inspiration to us all. ...read more.