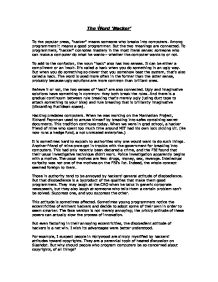 The Word 'Hacker' To the popular press, "hacker" means someone who breaks into computers. Among programmers it means a good programmer. But the two meanings are connected. To programmers, "hacker" connotes mastery in the most literal sense: someone who can make a computer do what he wants-- whether the computer wants to or not. To add to the confusion, the noun "hack" also has two senses. It can be either a compliment or an insult. It's called a hack when you do something in an ugly way. But when you do something so clever that you somehow beat the system, that's also called a hack. The word is used more often in the former than the latter sense, probably because ugly solutions are more common than brilliant ones. Believe it or not, the two senses of "hack" are also connected. Ugly and imaginative solutions have something in common: they both break the rules. And there is a gradual continuum between rule breaking that's merely ugly (using duct tape to attach something to your bike) and rule breaking that is brilliantly imaginative (discarding Euclidean space). Hacking predates computers. When he was working on the Manhattan Project, Richard Feynman used to amuse himself by breaking into safes containing secret documents. This tradition continues today. When we were in grad school, a hacker friend of mine who spent too much time around MIT had his own lock picking kit. ...read more.

Increasingly, the brains (and thus the value) of products is in software. And by this I mean software in the general sense: i.e. data. A song on an LP is physically stamped into the plastic. A song on an iPod's disk is merely stored on it. Data is by definition easy to copy. And the Internet makes copies easy to distribute. So it is no wonder companies are afraid. But, as so often happens, fear has clouded their judgement. The government has responded with draconian laws to protect intellectual property. They probably mean well. But they may not realize that such laws will do more harm than good. Why are programmers so violently opposed to these laws? If I were a legislator, I'd be interested in this mystery-- for the same reason that, if I were a farmer and suddenly heard a lot of squawking coming from my hen house one night, I'd want to go out and investigate. Hackers are not stupid, and unanimity is very rare in this world. So if they're all squawking, perhaps there is something amiss. Could it be that such laws, though intended to protect America, will actually harm it? Think about it. There is something very American about Feynman breaking into safes during the Manhattan Project. It's hard to imagine the authorities having a sense of humor about such things over in Germany at that time. ...read more.

They can sense totalitarianism approaching from a distance, as animals can sense an approaching thunderstorm. It would be ironic if, as hackers fear, recent measures intended to protect national security and intellectual property turned out to be a missile aimed right at what makes America successful. But it would not be the first time that measures taken in an atmosphere of panic had the opposite of the intended effect. There is such a thing as American-ness. There's nothing like living abroad to teach you that. And if you want to know whether something will nurture or squash this quality, it would be hard to find a better focus group than hackers, because they come closest of any group I know to embodying it. Closer, probably, than the men running our government, who for all their talk of patriotism remind me more of Richelieu or Mazarin than Thomas Jefferson or George Washington. When you read what the founding fathers had to say for themselves, they sound more like hackers. "The spirit of resistance to government," Jefferson wrote, "is so valuable on certain occasions, that I wish it always to be kept alive." Imagine an American president saying that today. Like the remarks of an outspoken old grandmother, the sayings of the founding fathers have embarrassed generations of their less confident successors. They remind us where we come from. They remind us that it is the people who break rules that are the source of America's wealth and power. Those in a position to impose rules naturally want them to be obeyed. But be careful what you ask for. You might get it. ...read more.