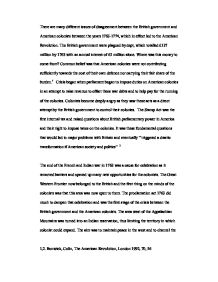 There are many different issues of disagreement between the British government and American colonists between the years 1763-1774, which in effect led to the American Revolution. The British government were plagued by dept, which totalled �137 million by 1763 with an annual interest of �5 million alone. Where was this money to come from? Common belief was that American colonies were not contributing sufficiently towards the cost of their own defence nor carrying their fair share of the burden.1 Crisis began when parliament began to impose duties on American colonies in an attempt to raise revenue to offset these war debts and to help pay for the running of the colonies. Colonists become deeply angry as they saw these acts as a direct attempt by the British government to control their colonies. The Stamp Act was the first internal tax and raised questions about British parliamentary power in America and their right to impose taxes on the colonies. It was these fundamental questions that would led to major problems with Britain and eventually " triggered a drastic transformation if American society and politics" 2 The end of the French and Indian war in 1763 was a cause for celebration as it removed barriers and opened up many new opportunities for the colonists. The Great Western Frontier now belonged to the British and the first thing on the minds of the colonists was that this area was now open to them. The proclamation act 1763 did much to dampen that celebration and was the first stage of the crisis between the British government and the American colonists. ...read more.

They " emphasised the scale of colonial resistance and set precedents for the future" 6 . Sons of Liberty took distinct and successful measures of achieving goals by using violent demonstrations against property, not people. In effect it was the acts of the Sons of Liberty, most notably the boycott of British goods, which in the end led parliament to repeal the act. 5. Bailyn Bernard, The Great Republic, Canada,1992, 229 6. Bonwick Colin, The American Revolution, London 1991, 72 In March 1766 parliament finally repealed the stamp act by passing the Declaratory Act, which reasserted parliaments authority to legislate for the colonies in all cases. In other words, parliament insisted that colonies would not be exempt from any parliamentary measure, including taxation. Americans however interpreted the act as excluding taxation and so did not consider it to be a threat and it is this fundamental disagreement that would be the source of future disagreement. After the Stamp Act crisis American sensitivities to all forms of English taxation were thoroughly aroused.7 With the passing of the Townshend Duties in 1767 resistance reappeared within the colonies. John Dickinson, a Philadelphia lawyer published Letters from a Pennsylvanian Farmer, the most popular pamphlet of the 1760's. He conceded that parliament could regulate trade and acknowledged that the processes might bring in incidental revenue but denied that any duty could be imposed which had the prime objective of producing tax. 8 In 1768 the Massachusetts assembly issued a Circular Letter to all other legislatures. ...read more.

These were designed to strengthen British authority in Massachusetts and secure colonial dependence on the crown and parliament. 17 The Boston Port Act effectively shut down all commercial shipping in Boston Harbour until compensation was paid for the destroyed tea. The second act altered the colonies charter thus extending royal authority to appointed judges, local officials and selected jurymen. The third act allowed royal officials charged with murder to be tried in England where they would avoid a bias jury. The forth act, the Quartering act allowed governor to take over private buildings for the quartering of troops. These Coercive Acts were the last straw. They convinced Americans once and for all that parliament had no more right to make laws for them than to tax them.18 The tea acts and the 14,16,18 Bailyn Bernard, The Great Republic, Canada,1992, 239, 240, 240 17, Bonwick Colin, The American Revolution, London 1991, 78 15,Middlekauff Robert, The Glorious Cause: the American rev1763-89,NY 1982.221 Coercive acts were therefore the climax of the crisis between parliament and the colonists and were the final straw that would led to war. In conclusion, although it is difficult to point out any singular event which led to the American revolution, it is clear that the British attempt to impose taxes on the colonies helped led to the revolution. British bore a heavy dept and the colonies, lightly taxed might take over a part of the burden. 19 Therefore the financial situation of the British government essentially caused Britain to introduce these measure thus eventually leading to war. 19. Middlekauff Robert, The Glorious Cause:The American Rev 1763-89, NY,1982. 151 ...read more.