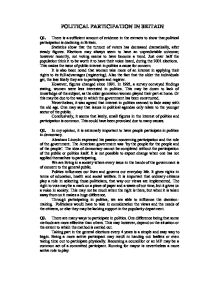 There is a sufficient amount of evidence in the extracts to show that political participation is declining in Britain.

POLITICAL PARTICIPATION IN BRITAIN Q1. There is a sufficient amount of evidence in the extracts to show that political participation is declining in Britain. Statistics show that the turnout of voters has decreased dramatically, after steady figures. Elections may always seem to have an unpredictable outcome; however recently, not voting seems to have become a trend. Just over half the population think it to be worth it to have their voice heard, during the 2001 elections. This makes the issue of public interest in politics a cause for concern. It is also been noted that women take more of an interest in applying their rights to its full advantages (registering). Also the fact that the older the individuals get, the less likely they are to participate and register. However, figures changed since 1991. In 1995, a survey conveyed findings stating, women were less interested in politics. ...read more.

We are living in a society where every issue in the hands of the government is of concern to the general public. Politics influences our lives and governs our everyday life. It gives rights in terms of education, health and social welfare. It is important that ordinary citizens play a role in selecting those politicians, that way our views are implemented. The right to vote may be a mark on a piece of paper and a waste of our time, but it gives us a voice in society. This may not be much when the right is there, but when it is taken away from us it makes a huge difference. Through participating in politics, we are able to influence the decision-making. Politicians would have to take in consideration the views and the needs of the citizens, or else they may be lacking support in the popularity department. ...read more.

This will also improve the popularity of the candidate, while relating to the needs of the public. Another important factor is to allow the public to have easy access to the political system. Where it is easier to participate, the number of participants will increase. It can also be increased by making it more interesting and appealing. Do things that would affect the public. This would encourage more to get involved, as public opinion would be an issue. It would also be helpful to focus campaigns more on the younger generation. As it seems that political participation seems to be more of an old peoples thing. In the eyes of youngsters, politics is all about the law (a load of rules) and old men and women. The presence of younger MP's in the Houses of Commons will more likely represent the needs of the younger generation as well as encouraging them. Consequently, more are likely to want to play their part in gaining useful political change that will affect their lives for the better. ...read more.