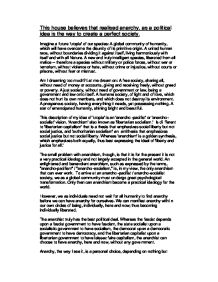 This house believes that realised anarchy, as a political idea is the way to create a perfect society.

This house believes that realised anarchy, as a political idea is the way to create a perfect society. Imagine a future 'utopia' of our species: A global community of humanity, which will have overcome the disunity of its primitive origin. A united human race, without boundaries dividing it against itself, living harmoniously with itself and with all Nature. A new and truly intelligent species, liberated from all malice -- therefore a species without military or police forces, without war or terrorism, without violence or hate, without crime or injustice, without courts or prisons, without fear or mistrust. Am I dreaming too much? Let me dream on: A free society, sharing all, without need of money or accounts, giving and receiving freely, without greed or poverty. A just society, without need of government or law, being a government and law onto itself. A humane society, of light and of love, which does not hurt its own members, and which does not destroy its environment. A prosperous society, having everything it needs, yet possessing nothing. ...read more.

If one wants anarchy for oneself, one can have it, regardless of the political system society has. All the anarchist needs to do is affirm anarchy for oneself, and one establishes the way of anarchy as the way of oneself. One does not need, thereafter, to impose that anarchy upon others. Trying to impose one's will upon others is not the way of what I view as 'true anarchy', anarchy without hypocrisy. True anarchy is a lucid anarchy, an anarchy established in awakened consciousness. The true, or realized, anarchist delights are one's own self-empowering anarchy and suggests it to others without trying to force anything. Anarchy is not a system, but a natural way of life. It is a natural way of life because being free is the natural state of every living being. That natural state freedom is our essential and original innocence, which need only be realized, rediscovered. And therefore, contrary to popular anarchist belief, it is not governments that stand in anarchism's way; for, to the realized anarchist, there already is no government, already anarchy, established not from the outside in, but from the inside out. ...read more.

The one thing obeyed and followed for the anarchist, is only one's own conscience. And if a policy of societal authority conflicts with one's own conscience, the anarchist will not cooperate with that policy. The realized anarchist, who has a deep understanding and respect of what freedom really is, will actively disobey unjust policy through ways civil disobedience, in the spirit of Gandhi and Martin Luther King. The realized anarchist will not allow oneself to degenerate into a brute who makes use of brute force; for to do so would be to dishonour one's very principles of true anarchy. The power of the realized anarchist is spirit power, rather than brute power. The goal of anarchy is not ungoverned chaos, but rather, perfect government and perfect order. A perfect government comprised of sovereign individuals interrelating together spontaneously, harmoniously, and non-authoritatively. It is a united body of diverse sovereigns, together governing themselves without forcing and without harming anything. The day we will have no more tyrannical governments, no more capitalistic exploitation, and no more military forces is the day we, as a united, communalistic, and non-malicious humanity, is the day we will be truly free. May Anarchia come: on earth, as it is in heaven ...read more.