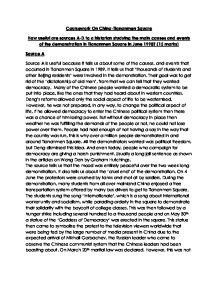 Coursework On China-Tiananmen Square How useful are sources A-D to a historian studying the main causes and events of the demonstration in Tiananmen Square in June 1998? (15 marks) Source A Source A is useful because it tells us about some of the causes, and events that occurred in Tiananmen Square in 1989. It tells us that 'thousands of students and other Beijing residents' were involved in the demonstration. Their goal was to get rid of the 'dictatorship of old men', from that we can tell that they wanted democracy. Many of the Chinese people wanted a democratic system to be put into place, like the ones that they had heard about in western countries. Deng's reforms allowed only the social aspect of life to be westernised. However, he was not prepared, in any way, to change the political aspect of life. If he allowed democracy to enter the Chinese political system then there was a chance of him losing power. But without democracy in place then weather he was fulfilling the demands of the people or not, he could not lose power over them. People had had enough of not having a say in the way that the country was run, this is why over a million people demonstrated in and around Tiananmen Square. ...read more.

Therefore there is nothing included about all the road blocks that were set up, or the retreat of the troops to the outskirts of the city after their attempt of getting into the city. Source B Source B is useful to historians because it gives us an insight into what the Chinese people of the time would have seen. The source tells us that the urban households were bigger consumers of electrical devices, such as radios and television, and other household items and goods that would improve the standard of living. This source shows us why people moved from rural areas to urban areas, they believed that their standard of living would be improved in the cities of China. This mass migration of peasants seeking work in the cities caused crime, overcrowding, shanty towns and inequality. The Tiananmen Square demonstrators were demonstrating in order to get rid of these things. They also wanted a more western lifestyle, when people had a taste of freedom they suddenly wanted more. After 20 years of Maoismic ideas, people were allowed to play western music and concerts were allowed. Singers like Wham and Roxette were finally allowed to play to a non selected audience and weren't told what to sing and what not to sing. All of these things gave people a very delicious taste of the western lifestyle. ...read more.

Unless you had good connections within the top jobs then you would have to carry on leading a lower class life. This great division between the rich and poor defies everything that communism stands for. One of the main reasons as to why the Chinese people allowed communism was because they were promised equality among the citizens of China. Another reason as to why the Chinese thought that corruption was dwelling among the Chinese leaders was because during the memorial service of Hu Yaobang, a great figure who was seen by the students of China as the one man that could make a difference and bring in democracy into the Chinese government, a few students tried to press a petition into the hands of Li Peng and other government officials as they made their way into the great hall but the government officials refused to take the petition. This refusal was taken as a sign of how detached the government had become of the people. The CCP were meant to be a party of the people. Now they had completely stopped listening to them. Their only concern was keeping their power-another sign of corruption. This source is similar to other sources such as source A, which also states corruption as being one of the reasons for the protest. ...read more.