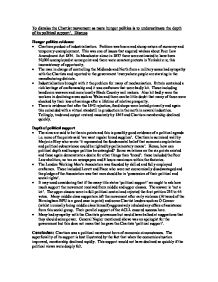 To dismiss the Chartist movement as mere hunger politics is to underestimate the depth of its political support'. Discuss

To dismiss the Chartist movement as mere hunger politics is to underestimate the depth of its political support'. Discuss Hunger politics evidence: * Chartism product of industrialisation. Problem was boom and slump nature of economy and temporary unemployment. This was one of issues that angered w/class about Poor Law Amendment Act 1834. In Manchester alone in 1837 there were estimated to have been 50,000 unemployed at some point and there were constant protests in Yorkshire re, this inconsistency of opportunity. * The man in charge of controlling the Midlands and North from a military sense had sympathy with the Chartists and reported to the government 'everywhere people are starving in the manufacturing districts. ...read more.

Tellingly, trade and output revived massively by 1843 and Chartism membership declined quickly. Depth of political support * The aims are said to be the six points and this is possibly good evidence of a political agenda i.e. none of the points said 'we want regular bread supplies'. Chartism is surmised well by Marjorie Bloy who wrote 'it represented the fundamental belief that economic exploitation and political subservience could be righted by parliamentary means'. Hence, how can political depth and hunger politics be untangled? Some variations on the six points existed and these again demonstrate a desire for other things than 'bread': these included the Poor Law abolition, no tax on newspapers and 8 hours maximum within the factories. * The London Working Men's Association was founded by skilled and fully employed craftsmen. ...read more.

Many middle class supporters left the movement after early violence (Attwood of the Birmingham BPU is a good case in point) and some Chartist leaders such as O Connor (whilst ironically being middle class himself) aggressively rebuked any offers of assistance from this social group. Their parallel support of the ACLL ensured success here. * Many had sympathy with the Chartists grievances but would have balked at suggestions that they should seize power. General Napier mentioned above was an apologist for the government but this does not mean that he gave the Chartists 'political support'. Conclusion: Chartism was a political movement born of economic circumstances. The superficiality of its support is best illustrated by the fact that when the economic situation improved, membership declined rapidly. This support would not have declined so quickly if the political views were deeply felt. ...read more.