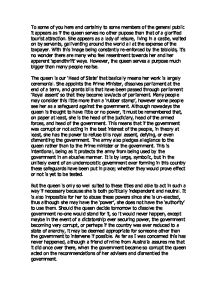 To some of you here and certainly to some members of the general public it appears as if the queen serves no other pupose than that of a glorified tourist attraction.

To some of you here and certainly to some members of the general public it appears as if the queen serves no other pupose than that of a glorified tourist attraction. She appears as a lady of leisure, living in a castle, waited on by servants, gallivanting around the world all at the expense of the taxpayer. With this image being constantly re-enforced by the tabloids, it's no wonder there are many who feel resentment towards her and her apparent 'spendthrift' ways. However, the queen serves a purpose much bigger than many people realise. The queen is our 'Head of State' that basically means her work is largely ceremonial. She appoints the Prime Minister, dissolves parliament at the end of a term, and grants bills that have been passed through parliament 'Royal assent' so that they become law/acts of parliament. Many people may consider this little more than a 'rubber stamp', however some people see her as a safeguard against the government. Although nowadays the queen is thought to have little or no power, it must be remembered that, on paper at least, she is the head of the judiciary, head of the armed forces, and head of the government. ...read more.

Should the queen decide tomorrow to dissolve the government no-one would stand for it, so it would never happen, except maybe in the event of a dictatorship ever securing power, the government becoming very corrupt, or perhaps if the country was ever reduced to a state of anarchy, it may be deemed appropriate for someone other than the government to intervene if possible. As far as I was concerned this has never happened, although a friend of mine from Australia assures me that it did once over there, when the government became so corrupt the queen acted on the recommendations of her advisers and dismantled the government. So if you abolished the monarchy you would need to find someone who you could trust with such roles. The main argument against the queen is that she is un-elected, thus undemocratic. However, should you elect the head of state democratically, you risk losing these safeguards. A president that was directly elected (elected by the public) would wield a great deal of authority, so he/she would be far more likely than the queen to exercise their powers, as they would be democratically elected, and could claim they represented the public. ...read more.

Though the monarchy was estimated to be costing the British taxpayers a whopping �60 million a year in 1994, it seems this is still far less than a president. It is also claimed that the money the Royal family brings into the country through tourism, more than covers their fee. Despite this though, the fact remains that a small majority of people are still in favour of the monarchy, though there is little doubt their popularity is rapidly decreasing. In the early 1990s only around 5% of the public wished to see to monarchy abolished. In a 1994 TV poll this figure rose to 44%. Clearly there has been a definite shift in attitudes. However, it is worth bearing in mind, there was overwhelming public support for Diana (dubbed 'The People's Princess"/"The Queen of Hearts" by the media at the time). And with Prince William who is hailed very much as 'his mother's son' set to become the next King, the monarchy's popularity is likely to be on the increase once more. So for the moment at least, it seems as if the issue of the abolition of the monarchy will remain within the confines of heated debate, rather than parliamentary discussion. ...read more.