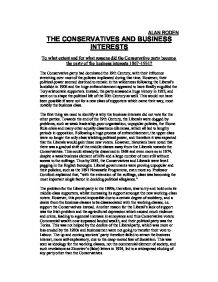 To what extent and for what reasons did the Conservative party become the party of the business interests 1867-1931?

ALAN RODEN THE CONSERVATIVES AND BUSINESS INTERESTS To what extent and for what reasons did the Conservative party become the party of the business interests 1867-1931? The Conservative party had dominated the 19th Century, with their influence stretching over most of the policies implicated during that time. However, their political power seemed destined to remain in the wilderness following the Liberal's landslide in 1906 and the huge enfranchisement appeared to have finally engulfed the Tory aristocratic supporters. Instead, the party amassed a huge victory in 1922, and went on to shape the political life of the 20th Century as well. This would not have been possible if were not for a new class of supporters which came their way, most notably the business class. The first thing we need to identify is why the business interests did not vote for the other parties. Towards the end of the 19th Century, the Liberals were dogged by problems, such as weak leadership, poor organisation, unpopular policies, the Home Rule crisis and many other equally disastrous dilemmas, which all led to lengthy periods in opposition. Following a huge process of enfranchisement, the upper class were no longer the only class wielding political power, and therefore it was expected that the Liberals would gain these new voters. ...read more.

As already mentioned, they benefited hugely from class alignment, whereby the middle classes felt compelled to vote for the Conservatives, rather than vote for the so-called working class parties. This was quite probably the single most important reason for the Conservatives success during this period of time. However, their policies were also purposely intended to appeal to their area of supporters. At the turn of the Century, the party's main policies were largely dictated by Lord Salisbury and A.J. Balfour, who were generally uninterested in seeking popularity through social reform. They saw the rights of property as being far superior and protected their wealthy supporters by avoiding redistribution of wealth -as Lord Cecil said, "it was plain that to take what one man has and to give it to another is unjust, even though the first man may be rich and the second man poor." In addition, to combat the Liberal's "Newcastle Programme", the Conservatives introduced the idea of Tariff Reforms, which proved popular amongst the business classes. This strived to keep taxes low by introducing tariffs on imports, although the Liberals made much play of the "dear loaf" and the Conservative's policy to tax food. Basically, the Conservative policies were not considered beneficial to the working classes, such as their long-term victory over the Taff Vale strikes. ...read more.

Therefore, the Tories were not merely the party of businessmen - their support stayed loyal with the upper classes and, maybe surprisingly, blossomed into the lower middle classes and even some of the working class. To conclude, I would say that the Conservative party managed to attract the votes of the business interests from 1867-1931, through a number of reasons. Firstly, they did not want to vote Liberal, with their unpopular policies and image problem, and they certainly did not want to vote Labour with its association with socialism. In addition, the decline of the aristocracy led the Tories to a new financial base - the wealthy businessmen, and their input replaced what had been lost. Finally, the Conservatives strived to entice the very class we are talking about, with their right-wing policies such as Tariff reforms, and their reluctance to adopt such measures as redistribution of wealth. To what extent this business element dominated the party is relatively unquestionable - the commercial and industrial gentlemen formed the bulk of the supporters, politicians and even broke into the House of Lords. While classes above and below them also voted Tory, there is no doubt that the Conservative party had become the party of the business interests. ?? ?? ?? ?? ...read more.