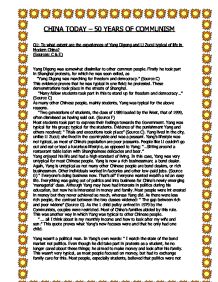 To what extent are the experiences of Yang Digong and Li Zucui typical of life in Modern China?

CHINA TODAY - 50 YEARS OF COMMUNISM Q1: To what extent are the experiences of Yang Digong and Li Zucui typical of life in Modern China? (Sources: C & E) Yang Digong was somewhat dissimilar to other common people. Firstly he took part in Shanghai protests, for which he was soon exiled, as "Yang Digong was marching for freedom and democracy." (Source C) This evidence proves that he was typical in one field; he protested. These demonstrations took place in the streets of Shanghai. "Many fellow students took part in this to stand up for freedom and democracy..." (Source C) As many other Chinese people, mainly students, Yang was typical for the above reasons. "Two generations of students, the class of 1989 lauded by the West, that of 1999, often dismissed as having sold out. (Source F) Most students took part to express their feelings towards the Government. Yang was typical for his group; typical for the students. Evidence of the punishment Yang and others received; " Trials and executions took place" (Source C). Yang lived in the city, unlike Li Zucui; she lived in the countryside and was a peasant. Yang's lifestyle was not typical, as most of China's population are poor peasants. People like Li couldn't go out and eat or lead a luxurious lifestyle, as opposed to Yang; "...Sitting around a restaurant table laden with Shanghainese delicacies and beer." Yang enjoyed his life and had a high standard of living. In this case, Yang was very untypical for most Chinese people. Yang is now a rich businessman; a bond dealer. Again, Yang is untypical as not many other Chinese people are bond dealers, or rich businessmen. Other individuals worked in factories and other low-paid jobs. (Source G) " Everyone's doing business now. That's all" Everyone wanted wealth and an easy life. Everything was going out of politics and into business for China's newly emerging 'managerial' class. ...read more.

This all links to the Falun Gong; a religious denomination, which consists purely of middle-aged, middle class China. Members of this cult include Civil Servants, factory managers, office workers, etc. Many of these people never committed crimes. The sect leader called Li Hongzai, received accusations from the Government that he was planning to overthrow the Communist Party. As the CCP had failed before, e.g. Great Leap Forward, they couldn't afford to take another fall; they had to restrict religious freedom. As people were angered at this law, they demonstrated, often outside main government buildings. These protests were signs that the Chinese people wanted freedom, not political power. All the books published by Falun Gong, more than 100,000, were destroyed. More than 10,000 cassettes destroyed. This proved publicly that there was no religious freedom. This was just an attempt to make the sect followers reject it; show it was powerless.. More than 2 million Chinese people were involved in the Falun Gong, which was a mixture of Buddhism and Taoism. This sect involved meditation, and they never disturbed anyone by doing this. As this sect practised peace and meditation, they weren't doing any harm, especially to the government. Prison is not a place for innocent people. So many people have been involved in this sect including Communist party members and army members. "As many as 700,000 party members are suspected of being heavily tied...." This confirms that many people believed in this path of life. It was popular and accepted by many people. A warning was given to them; if the group didn't renounce themselves punishment would be given. Many were already arrested. The youngest political prisoners was an 8 year old boy who the Dalai Lama believe is the 11th incarnation of the Panchen Lama, which is the 2nd most important religious figure in Tibet. All minorities and religions are treated with great brutality. ...read more.

"A peasant landownership" was the aim, Landownership wasn't achieved. Because of the various stages of this land, freedom is not given to the peasants. Mao began to introduce land reform, the redistribution of land from landlords to poor peasants in the 1920's. The process of this didn't start in earnest until the late 1940's as Communists swept into power. Then in 1950, the Agrarian Reform Law introduced a legal framework for the transfer of land fro rich to poor peasants. After the new land was implemented, poor peasants owned 46.8% of land and landlords owned 2.1%. Poor men still had to rent land from richer citizens. Mao was determined to end this, and hoped eventually to ensure that all land was commonly owned. Freedom wasn't given to peasants. It didn't have instant success. Transforming from Agriculture to an Industrial on, in my opinion was achieved. There were various attempts to implement this aim. For example the Great Leap Forward where it's aim was to change. For this Chinese people were made to stay in mess hall communes, sleep in large dormitories and shared everything. The scheme was over-ambitious. The 4m's were aimed to develop agriculture, industry, science and technology and defence. These progressed exceptionally slowly. China today is till predominantly agricultural, but are well known for their industry. The 4m's were quite successful. Industries such as mining and textile making were developing in th early 1900's. The industrial aspect of the Great Leap Forward was a great success. The productions of steel and coal had grown greatly. The overall increase of industrial growth was about 15.5%. New products, for example electrical goods were manufactured in China for the first time. Mao set out to accelerate industrial development. Steel production had indeed greatly increases. Overall, Mao's policies on industry were a great success. When he came to power China was an agricultural country who peasants had no industrial experience. After two years of his death, by 1978, it had a growing industrial factor that produced 72 per sent of national output. Overall, it was an achievement. By Surjeet Mann ...read more.