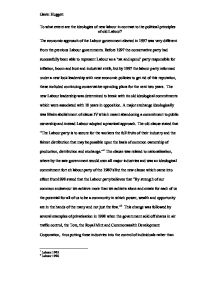 To what extent are the ideologies of new labour in contrast to the political principles of old Labour?

To what extent are the ideologies of new labour in contrast to the political principles of old Labour? The economic approach of the Labour government elected in 1997 was very different from the previous Labour governments. Before 1997 the conservative party had successfully been able to represent Labour as a 'tax and spend' party responsible for inflation, boom and bust and industrial strife, but by 1997 the labour party reformed under a new look leadership with new economic policies to get rid of this reputation, these included continuing conservative spending plans for the next two years. The new Labour leadership was determined to break with its old ideological commitments which were associated with 18 years in opposition. A major exchange ideologically was Blairs abolishment of clause IV which meant abandoning a commitment to public ownership and instead Labour adopted a practical approach. ...read more.

This policy would not have been considered under old Labour due to its ideological commitment to public ownership and because privatisation followed the policies of Mrs Thatcher in the 1980's.Under New Labour Gordon Brown developed new economic strategies which would shift the role of the active state, from Keynesian demand management to supply-side interventions. "The supply side means not economic or industrial planning but the provision of education and training".3 Brown communicated new ideas for the economy , including giving the Bank of England the control to change interest rates, a decision which had previously been taken by the treasury. This was both an economically and politically approved decision which would enable interest rates to independently fixed. Old Labour may not have agreed with this policy because of its desire for public ownership and government control. Before the 97 general election some argued that the Labour leadership's abandonment of old ideological commitments and acceptance of market economics meant there were no real difference in the economic policies of the two main parties in some points this was true. ...read more.

which meant that trade unions members' power was curbed and the power of the unions declined, particularly during the leadership and parliamentary candidate's elections. The main principles of Old Labour were influenced by the Social Democrats and Democratic Socialists, this was in contrast to New Labour who banned the traditional Labour word 'socialism' but accepted the term Social Democracy. Old Labour had a clause for Nationalism of means of production, distribution and exchange whereas new Labour believes in the power, wealth and opportunity in the hands individuals and the 'many.' Old Labour also had a close relationship with trade unions which has been undermined in recent years and the party is now financed by individuals, and business donations. Old Labour maintained the welfare state a policy with which it has been argued New Labour have continued with after Browns new spending increases have kept with socialist tradition of providing for the population form the 'cradle to the grave' vote and is financed by individual and business donations. 1 Labour 1993 2 Labour 1998 3 Driver and Martell 1998 p32-33 Gavin Huggett ...read more.