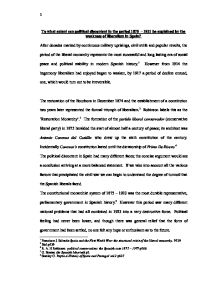 To what extent can political discontent in the period 1875 -1931 be explained by the weakness of liberalism in Spain?

To what extent can political discontent in the period 1875 - 1931 be explained by the weakness of liberalism in Spain? After decades marked by continuous military uprisings, civil strife and popular revolts, the period of the liberal monarchy represents the most successful and long lasting era of social peace and political stability in modern Spanish history.1 However from 1914 the hegemony liberalism had enjoyed began to weaken, by 1917 a period of decline ensued, one, which would turn out to be irreversible. The restoration of the Bourbons in December 1874 and the establishment of a constitution two years later represented the formal triumph of liberalism.2 Robinson labels this as the 'Restoration Monarchy'.3 The formation of the partido liberal conservador (conservative liberal party) in 1875 heralded the start of almost half a century of peace; its architect was Antonio Canovas del Castillo who drew up the sixth constitution of the century. Incidentally Canovas's constitution lasted until the dictatorship of Primo De Rivera.4 The political discontent in Spain had many different faces; the concise argument would see a conclusion arriving at a more balanced statement. If we take into account all the various factors that precipitated the civil war we can begin to understand the degree of turmoil that the Spanish liberals faced. The constitutional monarchist system of 1875 - 1923 was the most durable representative, parliamentary government in Spanish history.5 However this period saw many different national problems that had all combined in 1923 into a very destructive force. ...read more.

The friendly agreement of Madrid did not extend into the provinces. It was not uncommon for bitter fighting to take place in small villages. Here we see that liberalism, together with conservatism, managed to cause a vast amount of unrest not only in the cities but also within the countryside. Brenan states that the caciques, were still influential up to 1917, "their palmist days were from 1840 - 1917, after which, with the rise of a real public opinion and of a genuine body if voters, they began to lose their influence."11 The majority of Spaniards decided it was better to live with injustice and corruption than stand up against the ruling elite and face ruin. The consumption of land by the large latifundio estates, especially in the south, was believed to be caused by liberal ideas. There was corruption at all the upper layers of society, the politicians governed the judicial system, there existed a system of one power, and Spain did not adhere to the separation of powers that was common in other liberal states around this time. The break up of the liberal party over the issue of the most limited sort of autonomy for Catalonia in 1913 left parts of the liberal party concerned that this was the first step in dividing the unity and sovereignty of Spain.12 The crisis of 1917 highlighted the political need for strong leadership; the CNT and the UGT were politically aligned. ...read more.

According to Salvado it was clear in 1918 that Spain was sliding into a revolutionary situation, the Russian experience the year before had given the Andalusian peasantry a means to spark a rebellion in the country, the revolutionary movement had an urban and rural dimension to it, starving peasants demanded 'land and bread'.20 The authorities of the liberal government collapsed, between 1919 and 1923 short lived governments, based in Madrid, were unable to control the increasing violence and terror, which reigned, in the country. It should be kept in mind that the crisis of Spanish parliamentary government occurred not because the system was growing more corrupt and unrepresentative, but on the contrary, as it became less corrupt and more representative.21 Therefore the political discontent can be said to have been caused by both the failure of liberalism and the political tension, caused by worldwide events. The Russian revolution and the First World War had a tremendous impact on Spanish thinking; the liberal party became overwhelmed by other political forces that thrived on instability. The failings of the past half a century began to creep back on the liberal party, who had no response to the overwhelming problems that they had originally caused. Perhaps if there had not been such influential surrounding events then the liberal party could have secured some sort of autonomy throughout this period. ...read more.