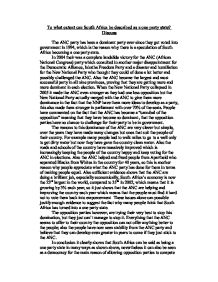 To what extent can south africa be described as a one party state ?

To what extent can South Africa be described as a one party state? Discuss The ANC party has been a dominant party ever since they got voted into government in 1994, which is the reason why there is a speculation of South Africa becoming a one party state. In 2004 their was a complete landslide victory for the ANC (African National Congress) party which consulted in another major disappointment for the Democratic Alliance, Inkatha Freedom Party and a disaster and humiliation for the New National Party who thought they could of done a lot better and possibly challenged the ANC. Also the ANC became the largest and most successful party in all nine provinces, proving that they are getting more and more dominant in each election. ...read more.

For example many people had to walk miles to go to a well only to get dirty water but now they have gave the country clean water. Also the roads and schools of the country have massively improved which is increasingly keeping the people of the country happy and keep voting for the ANC in elections. Also the ANC helped and freed people from Apartheid who separated Blacks from Whites in the country for 40 years, so this is another reason why people appreciate what the ANC party has done for them in terms of making people equal. Also sufficient evidence shows that the ANC are doing a brilliant job, especially economically, South Africa's economy is now the 23rd largest in the world, compared to 35th ...read more.

seen stability from the ANC party and believe that they can develop even greater in years to come if they just stick to the ANC. In conclusion it clearly shows that South Africa can be said as being a one party state in many ways as shown above, nevertheless it can also be seen as a democracy for the main reason of allowing opposition parties to compete with them by allowing the people of the country to vote and let them be eligible for a say in what they think is right for their country after South Africa used to be in misery for 40 years under Apartheid with not everyone being able to have their say and equal rights Paul Flecher-herd Modern Studies 5B 20.11.07. ...read more.