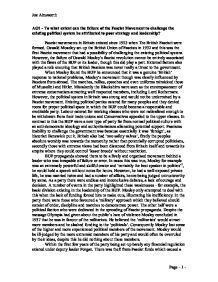 To what extent can the failure of the Fascist Movement to challenge the existing U.K. political system be attributed to poor strategy and leadership?

AO1 - To what extent can the failure of the Fascist Movement to challenge the existing political system be attributed to poor strategy and leadership? Fascist movements in Britain existed since 1923 when The British Fascisti were formed. Oswald Moseley set-up the British Union of Fascists in 1932 and this was the first Fascist movement that had a possibility of challenging the existing political system. However, the failure of Oswald Mosley's fascist revolution cannot be entirely associated with the flaws of the BUF or its leader, though this did play a part. External factors also played a role ensuring that British Fascism was never really a threat to the government. When Mosley found the BUF he announced that it was a genuine 'British' response to national problems, Mosley's movement though was clearly influenced by Fascism from abroad. The marches, rallies, speeches and even uniforms mimicked those of Mussolini and Hitler. Mistakenly the Blackshirts were seen as the encompassment of extreme conservatism attracting well respected members, including Lord Rothermere. However, the political system in Britain was strong and would not be undermined by a Fascist movement. Existing political parties catered for many peoples and they denied room for proper political space in which the BUF could become a respectable and creditable party. ...read more.

Mosley's Blackshirt stewards were not prepared to allow Mosley's speech to be ruined and proceeded to evict the hecklers out with use of force and violence in front of over 10,000. Several anti-fascists were severely injured and it was reported that Mosley directed the expulsion from the rostrum. The event was devastating for the Fascists damaging the BUF's reputation by symbolising Fascist violence. It also increased a growing discomfort among middle class supporters at the BUF's alignment with the German Nazi party as shortly after Olympia was likened to Hitler's 'Night of the long knives'. The most damaging blow though came when Lord Rothermere withdrew the support of the Daily Mail in rejection to the event. Instantly membership decreased from some 50,000 to just 5,000 and an already desperate funding situation deteriorated. The second event was the 'Battle of Cable Street' on the 4th October 1936 when Mosley attempted to lead a march through East London, an area of high Jewish population. Under Mosley's new anti-Semitic campaign the two factions converged and there was fierce street fighting between police and the anti-fascists totaling over 100,000, which included aggravated Jewish opposition who were 'roused and angry'2. The march was cancelled and the Fascists dispersed peacefully, however, the fighting that occurred led to the introduction of the Public Order Act of 1936 by the government in attempt to stem the violent tide. ...read more.

Members felt their patriotism was corrupted by an enemy who was actively supporting and communicating with their party's leader. Fascism became a national enemy and there was no way it could compete with the existing political parties. The government even feared the British Union was a possible Nazi 5th column. In May 1940 over Mosley and 700 Blackshirts were imprisoned Combinations of factors were to blame for Fascisms inability to challenge the political system. Firstly, Fascist ideology was clearly un-British, 'the word fascismo had no meaning beyond Italy'3. Use of violence was a radical feature and seemed to dissuade potential support. A significant reason was that the existing National government was strong and its ability to deal with the depression prevented Mosley exploiting the situation to gain power. Mosley himself was an indecisive leader severely weakening his authoritarian program. The adoption of anti-Semitism by Mosley was a poor strategy for a party looking to achieve power through constitutional means with universal support. Finally, WWII spelt final defeat for a Fascist revolution. With a country united against Fascism, patriotism, one of Mosley's key forces worked against him and there became no room for an extreme right in British politics. Unattributed quotes 1 Lord Boothby in a BBC broadcast from 1965. 2 Part of a speech by the Mayor of London in the East London Advertiser. 3 Gilbert Allardyce, 1979. Word count: 2200 ?? ?? ?? ?? Joe Ainsworth Page - 1 - ...read more.