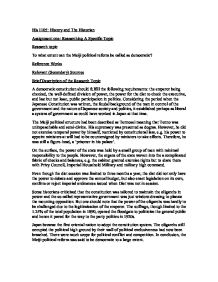 To what extent can the Meiji political reform be called as democratic?

His 1105: History and The Historian Assignment one: Researching A Specific Topic Research topic To what extent can the Meiji political reform be called as democratic? Reference Works Relevant (Secondary) Sources Brief Description of the Research Topic A democratic constitution should fulfill the following requirements: the emperor being checked, the well-defined division of power, the power for the diet to check the executive, and last but not least, public participation in politics. Considering the period when the Japanese Constitution was written, the feudal background of the men in control of the government and the nature of Japanese society and politics, it established perhaps as liberal a system of government as could have worked in Japan at that time. ...read more.

Therefore, he was still a figure-head, a 'prisoner in his palace'. On the surface, the power of the state was held by a small group of men with minimal responsibility to the people. However, the organs of the state woven into the a complicated fabric of checks and balances, e.g. the cabinet granted exercise rights but to share them with Privy Council, Imperial Household Military and military high command. Even though the diet session was limited to three months a year, the diet did not only have the power to debate and approve the annual budget, but also enact legislation on its own, confirm or reject imperial ordinances issued when Diet was not in session. ...read more.