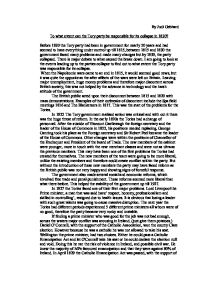 To what extent can the Tory party be responsible for its collapse in 1830?

By Judi Gebhard To what extent can the Tory party be responsible for its collapse in 1830? Before 1830 the Tory party had been in government for nearly 50 years and had seemed to have everything under control up till 1815, between 1815 and 1830 the government faced many problems and made many changes but by 1830, the party collapsed. There is major debate to what caused the break down. I am going to look at the events leading up to the parties collapse to find out to what extent the Tory party was responsible for its collapse. When the Napoleonic wars came to an end in 1815, it would seemed good news, but it was quite the opposite as the after affects of the wars were left on Britain. Leaving major unemployment, huge money problems and therefore major discontent across British society, this was not helped by the advance in technology and the harsh attitude of the government. ...read more.

Lord Liverpool the Prime minister, a man that was said have' respect, honesty, professionalism and skilled in controlling', resigned due to health issues. It is obvious that losing a leader with such great talents was going to cause massive disruption. The next year the Tories had different periods experienced 5 different prime ministers all whom were of no good, therefore the party became very rocky and unstable. If finding a prime minister who was good for the job was not bad enough, across the waters major conflict was arousing in Ireland. (just give them potatoes.) Daniel O'Connell, with the support of the Catholic Association, won the county Clare election. However because he was a catholic he was not allowed to take his seat. Wellington the prime minister, had two choices. Either he could pass a Catholic Emancipation Act and let O'Connell take his seat or he could declare the election null and void. Doing this he ran the risk of violence in Ireland, and possible civil war. ...read more.

So I think the decision of Wellington was for the best. Although pleasing the Irish meant displeasing the ultra Tories. However if Wellington decided against Catholic emancipation he could have lost the support of the more liberal Tories. However I do think that the Ultra Tories were largely responsible for the break down. The ultra Tories before 1820 had the British public in mass repression, we can see this by looking at their outbreaks of discontent. They got themselves into this mess by not listening to the public, being to harsh and generally not having much interest in their needs and welfare. I think whatever the public would have got what they wanted as they have millions of people as a threat and would be able to cause a civil war or revolution. I think the Ultra Tories were to blind to see this and without the Liberal Tories this would have happened. However because they did react the Ultras didn't like it and left leaving them with a very weak party which later lead to their collapse. ...read more.