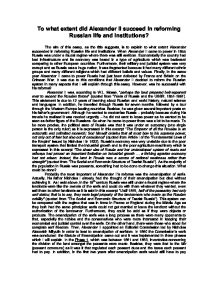 To what extent did Alexander II succeed in reforming Russian life and institutions?

To what extent did Alexander II succeed in reforming Russian life and institutions? The aim of this essay, as the title suggests, is to explain to what extent Alexander succeeded in reforming Russian life and institutions. When Alexander II came to power in 1855 Russia was under a feudal regime where there was still serfdom. Economically the country had bad infrastructure and its economy was based in a type of agriculture which was backward comparing to other European countries. Furthermore, their military and judicial system was very corrupt and as Russia was a huge nation, it was fragmented because it had many different ethnic groups and many different religions which had different beliefs and values. Finally, in the same year Alexander II came to power Russia had just been defeated by France and Britain on the Crimean War. It was due to this conditions that Alexander II decided to reform the Russian system in many aspects that I will explain through this essay. However, was he successful with his reforms? Alexander II was, according to W.L. Mosse, "perhaps the best prepared heir-apparent ever to ascend the Russian throne" (quoted from "Years of Russia and the USSR, 1851-1991). This statement is due to 12 years of learning about Russian and world history, natural science and languages. In addition, he travelled through Russia for seven months, followed by a tour through the Western Europe leading countries. Besides, he was given several important posts on his father's government. Although he wanted to modernise Russia - probably because during his travels he realised it was needed urgently - he did not want to loose power as he wanted to be seen as father figure of the Russians. So when he came to power there was a lot to be made. To be more precise, the political state of Russia was that it was under an autocracy (one single person is the only ruler) ...read more.

left them very much in the hands of the landowners and local gentry" (quoted from "The Social and Economic Structure of Tsarist Russia") the fact that they were controlled by the government shows Alexander II's determination in not loosing power, which would turn out to be fatal for him. As I said in the beginning of this essay, the judicial system in Russia was very corrupt so it was vital do Alexander II to reform it. Judges and lawyers became better paid and trained in order to avoid bribery. Furthermore, the judges started being elected for three years by local councils, though they could be removed by the government at any time. In order to ensure fairness on courts, the right to appeal was introduced and class division was no longer a factor in the courts. This was a very important change as before these reforms peasants and nobles were judged differently for the same crime. Moreover, a separation between civil and criminal cases was made as well as separate courts for crimes against the state were established. Finally, defendants were given a right to have a defence lawyer. Changes concerning the sentencing were also made as the punishment could be either paying a fine up to 300roubles or spending from three months to a year in prison. Flogging, which was practiced before, was now reduced. This new judicial system contribute do modernize Russia as it was less corrupt and fairer. According to H. Seton-Watson, "for a long time the court-room was the one place in Russia where real freedom of speech prevailed, and its main champion was the lawyer" (quoted from the book "Years of Russia and the USSR, 1851-1991"). However, the system had imperfections as well such as the fact that the lawyers were influenced by the government who controlled their promotions. In addition, several social groups remained outside this new system: the peasants, priests, military and revolutionaries for example. ...read more.

That is why revolutionary groups appeared. After the attempt on Tsar's life the government became more conservative and censorship was tightened again, bringing an environment of repression and instability which encouraged the populist movements such as "Going to the People". However, these populist movements failed because they were seen by the peasants with deep suspicion. Soon terrorism appeared and in 1881 Alexander II was assassinated in a bomb attack by the terrorist group People's Will. Ironically, he was assassinated when he was on his way to sign a bill that would begin a constitutional reform, which was what the revolutionaries wanted. Basically, the biggest error of Alexander II was his determination in not loosing power because if he had made a Constitution when he was reforming Russia probably he would not have been killed. However, if he had made such big reform, he would have to face the reactions of the conservative part of population in Russia, mainly composed by the aristocracy. So, in my point of view he did not succeed in reforming Russian life and institutions because of various reasons. Although he achieved the emancipation of the serfs they were not completely free as they had heavy taxes to pay for their lands, the redemption payments. About the reforms on the government he was not successful as well as I explained during the essay after saying what aspects he reformed in each subject. For example, he did not succeed with the Zemstva because even though they had representation of all social classes, the nobles were the ones who had more control on it but the last word about everything was from the government. So, in some way the government still controlled everything related to Russia. About the educational reforms, even if the education was controlled by the Zemstva, it was indirectly controlled by the government as the Zemstva could not make any decision without the government's approval. And, in my opinion, it was definitely this will of Alexander II in not wanting to loose power that cost his life. Ver�nica Rosinha, 5IB ...read more.