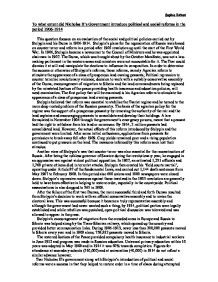 Sophie Birkett To what extent did Nicholas II's Government introduce political and social reforms in the period 1906-1914 This question focuses on an evaluation of the social and political policies carried out by Stolypin and his Duma in 1906-1914. Stolypin's plans for the regeneration of Russia were based on counter terror and reform in a period after 1905 revolution up until the start of the First World War. In 1906, Stolypin became a newcomer to the Council of Ministers and he was appointed chairman in 1907. The Duma, which was brought about by the October Manifesto, was not a law-making parliament in the western sense and ministers were not accountable for it. The Tsar could dismiss it at will and manipulate the elections to influence its composition. In order to determine the success or otherwise of Stolypin's reforms, those reforms, namely Agrarian reform to stimulate the appearance of a class of prosperous land owning peasants; Political repression to counter terrorise revolutionary violence; decision to work with a suitably conservative assembly of the Duma; encouragement of migration to ...read more.

Crop yields remained poor and a rising population continued to put pressure on the land. The measures inforced by this reform soon lost their stimulus. Another view of Stolypin's was that counter-terror was also essential for the reconstruction of Russia. After being the ruthless governor of Saratov during the revolutionary year, he engaged in an oppressive war against violent political opposition. In 1907, an estimated 1,231 officials and 1,768 private citizens died in terrorist attacks. Stolypin then created his 'field courts martial', operating under Article 87 of the fundamental Laws, and carried out 1,144 death sentences from May 1907 to February 1908. In this period also 600 unions and 1000 newspapers were closed down. Stolypin's repressive measures against those involved in the 1905 revolution are generally held to have been effective in helping to restore order, especially in the countryside. Political assassinations in also dropped to 365 in 1908. After the failure of the first two Dumas, the more successful third and forth Dumas resulted from Stolypin's decision to work with an official conservative assembly and to revise the electoral laws. ...read more.

time of chaos during attempted revolution but also helped Russia develop into a represented assembly with more freedom of speech than before. Migration was also successful with never less than 200,000 peasants moving to Siberia and primary education increasing to incorporate 7.2million children. The policies were also unsuccessful in that they did not achieve all that was needed. Although the period after 1906 saw a more prosperous peasantry, helped by the state through loans etc, the central problems remained unsolved. Higher education was also not targeted, meaning that although a lot of the population was now literate, there was a lack of skills developed. Also while many of the peasants may have retained some loyalty to the regime, little was done to strengthen the loyalty of other classes, particularly in towns. These indications, along with the infamous Lena Goldfields Massacre, where in 1912 workers were massacred after petitioning for improved employment conditions, and the growing number of industrial strikes deemed 'political' in the months before war, show that the reforms introduced were although partially successful, not radical enough. ...read more.