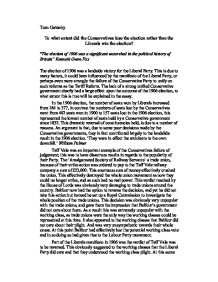 To what extent did the Conservatives lose the election rather than the Liberals win the election? &quot;The election of 1906 was a significant watershed in the political history of Britain&quot; Kenneth Owen Fox

At the height of tension, over this divide, Joseph Chamberlain resigned and as a result the Conservative lost support from the Liberal unionists that supported Joseph Chamberlain. Also the departure of many key Conservative figures in the run up to the election had a predominantly negative affect on the Conservative Party. For example the departure of Captain Richard Middleton, a key Party member, he was effectively responsible for the election campaign. His departure severely effected the Conservative's ability to run an effective electoral campaign. This lack of unity and strength within the Party implied to the voters that the Conservative Party had weakened and therefore many thought them unfit to run the country at a time when a strong government was needed. This obviously translates to a loss of votes and support for the Conservative Party. Also, Balfour having lost the working class vote through Taff Vale seemed unsatisfied and through more disastrous decisions proceeded to also lose the vote of the middle classes. An example of a decision that lost the middle class votes is that of Chinese slavery. Though directly it was not a decision of Balfour's it again shows his lack of awareness of public opinion. ...read more.

Yet because of the vagueness of the policy, in regards to Home Rule, if they failed to deliver this there would be fewer outcries from the Irish, as it was unclear of the nature of the Liberal promise, this could be viewed as clever political movement. The clever repealing of the unpopular Conservative reforms, coupled with a united Liberal traditional view, obviously proved to be a more attractive alternative to voters than another term of Conservative governing. "Balfour it seems was not the man for the job." Merrick Thomas To conclude, in my opinion it would be fair to allocate much of the blame for the result of the 1906 election to the Conservative Party under Balfour. Though in fairness the Liberals, through clever policy did capitalise on Balfour's mistakes. Perhaps Balfour's biggest mistake was his constant misjudgement of public opinion, this is especially true in regards to the working classes. Between 1900 and 1906 Balfour failed to realise the potential of the working class, he continued to upset them through such political misjudgements as Taff Vale, or the Unemployment Workers Act 1905. In the run up to the election therefore the Liberals won the working class support. It was perhaps the working class who had the biggest effect on the result of the election, this proved to be in favour of the Liberal Party. ...read more.