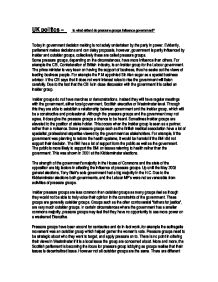 to what extent do pressure groups influence government

UK politics - to what extent do pressure groups influence government? Today in government decision making is not solely undertaken by the party in power. Evidently, parliament makes decisions and can delay proposals, however, government is partly influenced by insider and outsider groups, collectively these are called pressure groups. Some pressure groups, depending on the circumstances, have more influence than others. For example the CBI, Confederation of British Industry, is an insider group for the Labour government. The prime minister is very keen on having the support of business, thus he seeks out the views of leading business people. For example the P.M appointed Sir Alan sugar as a special business advisor. If the CBI says that it does not want interest rates to rise the government will listen carefully. Due to the fact that the CBI is in close discussion with the government it is called an insider group. Insider groups do not have marches or demonstrations. ...read more.

Groups such as the often controversial "fathers for justice", are very much outsider groups. In certain circumstances where the government has a smaller commons majority, pressure groups may feel that they have no opportunity to use more power on a weakened Executive. Pressure groups have been around for centauries and do in fact work, for example the suffragette movement was an outsider group which helped garner the women's vote. Pressure groups need to be strategic about who they want to target, and apply pressure on to. There is no point in offering their views in Westminster if it is a local issue the group are concerned about. More and more, the Scottish parliament is becoming the focus for pressure group lobbying as groups realise that their issues is decentralized issue. However not all outsider groups are the same. There are different degrees of being an outsider group. Terrorist groups such as Al'queda are on the margins. ...read more.

On the whole, it is very difficult to evaluate the impact that pressure groups have upon the decision making in central government. Evidently, they do bring about change but how much change they bring is still an unanswered question. Pressure groups influence is more likely to bring about changes in the long term. Actions of protestors and demonstrators in insider groups are more likely to be criticized for their methods, and thus less likely to bring about change. Even the methods that outsider groups use will not bring about a great deal of change; however, they do receive a lot of media coverage which will bring attention to their cause. For example the Make Poverty history campaign put Africa poverty on the front page of every news paper. Today, we live in a democracy. Pressure groups have the right to protest and introduce their causes to government. If their causes are popular government will listen and respond to certain groups demands, as the loss of support will ultimately lead to the decrease in election results for the government in power. ...read more.