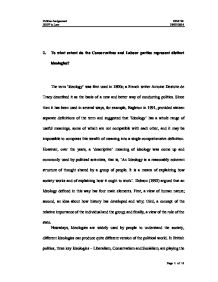 To what extent do the Conservatives and Labour parties represent distinct ideologies?

2. To what extent do the Conservatives and Labour parties represent distinct ideologies? The term 'Ideology' was first used in 1800s; a French writer Antoine Destutte de Tracy described it as the basis of a new and better way of conducting politics. Since then it has been used in several ways, for example, Eagleton in 1991, provided sixteen separate definitions of the term and suggested that 'Ideology' has a whole range of useful meanings, some of which are not compatible with each other, and it may be impossible to compress this wealth of meaning into a single comprehensive definition. However, over the years, a 'descriptive' meaning of ideology was come up and commonly used by political scientists, that is, 'An Ideology is a reasonably coherent structure of thought shared by a group of people. It is a means of explaining how society works and of explaining how it ought to work'. Dobson (1992) argued that an Ideology defined in this way has four main elements. First, a view of human nature; second, an idea about how history has developed and why; third, a concept of the relative importance of the individual and the group; and finally, a view of the role of the state. Nowadays, Ideologies are widely used by people to understand the society, different Ideologies can produce quite different version of the political world. ...read more.

that 'One nation Conservatism was revived and revitalised by the post-war election defeat of the Conservatives and the perception arising from that defeat that the party needed to modernise itself... Progressives accept and support the welfare state and Keynesian methods of macro-economic management... Progressivism stresses the importance of a social safety net to deal with poverty in addition to a limited redistribution of income and wealth. It espouses a paternalistic commitment to caring for all members of the community and favours government intervention in the economy to regulate markets.' (Whiteley et al. 1994, p.131) This post-war consensus - the welfare state had been accepted by the public at large and by every government elected between 1945 and 1979 (except Heath's in 1970), whether Labour or Conservative, pledged to maintain and improve its main institutions and practices. However, this consensus did not last for long; cracks began to appear from 1968 onwards in the face of economic and political developments which appeared to show that stability and prosperity could not be guaranteed by the policies adopted during the years of consensus. 1974 was a turning point. First, Margaret Thatcher became Conservative Leader following the party's defeat in the October 1974 election and the adoption of a New Right social market strategy. ...read more.

and fewer spending commitments, secondly making internal Labour Party reforms, followed by building a positive image for the Party Leader, and targeting new policies at 'Middle England', then wooing the press, minimising the impact of the Boundary Commission, and finally attempting to win the votes of women. Whilst nobody could deny that the result of the 1997 general election was a decisive victory for Labour, the number of seats won by Labour was inflated by the way in which the electoral system works. Also, turnout was the lowest in a general election since 1935. There are a number of factors, explain Labour's huge Commons majority. The long-term factors are the problems faced by the Conservative government and the repositioning of Labour. By the time the general election was called, the Conservative Party appeared tired, divided and sleazy whilst the Labour Party appeared fresh, united and dynamic. Reviewing the whole 18 years of Conservative rule, it can be claimed that the period had failed to produce the revolution in the nation's political attitudes that the Thatcherites had hoped for, so there was a mood that it was 'time for a change'. Although, long-term factors produced the climate in which the election was fought, a number of short-term factors had an important bearing on the result, such as electoral geography, Labour's campaign tactics, tactical voting, party membership and the campaign. ...read more.