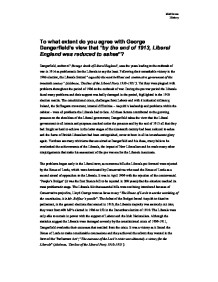 To what extent do you agree with George Dangerfield's view that "by the end of 1913, Liberal England was reduced to ashes"? Dangerfield, author of 'Strange death of Liberal England', sees the years leading to the outbreak of war in 1914 as problematic for the Liberals to say the least. Following their remarkable victory in the 1906 election, the Liberals formed "arguably the most brilliant and constructive government of the twentieth century" (Adelman, 'Decline of the Liberal Party 1910-1931'). Yet they were plagued with problems throughout the period of 1906 to the outbreak of war. During the pre war period the Liberals faced many problems and their support was badly damaged in the period, highlighted in the 1910 election results. The constitutional crisis, challenges from Labour and with it industrial militancy, Ireland, the Suffragette movement, internal difficulties - Asquith's leadership and problems within the cabinet - were all problems the Liberals had to face. All these factors contributed to the growing pressure on the shoulders of the Liberal government, Dangerfield takes the view that the Liberal government to all intents and purposes cracked under the pressure and by the end of 1913 all that they had fought so hard to achieve in the latter stages of the nineteenth century had been reduced to ashes and the flame of British Liberalism had been extinguished, never to burn in all its incandescent glory again. ...read more.

In essence I see the Labour challenge as less significant as the problems that arose due to the Liberal's policy of letting the situation correct itself. The amount of support for Trade Unions and the industrial militancy that plagued the country by the war clearly showed the Liberals were not in control of the situation and can be used as one of the factors to justify Dangerfield's view that Liberal England was in ashes by the end of 1913. It could be seen as inevitable that increasing working class consciousness would lead to Labour gaining power, but Dangerfield underestimated the problems facing Labour and also the strength of their challenge as I believe they themselves had lost touch with working class problems; Carl Brand says that by the end of 1914 the "Labour Party was dependant upon the Liberals, dissatisfied with its achievements, unsure of its aims, and apparently in decline". In 1912 The Liberal government introduced its Home Rule Bill, partly due to its commitment to the principle of granting Home Rule to Ireland and party due to its dependence on Irish Nationalists. This Bill was ferociously opposed by the Ulster Unionists who Asquith had failed to see how far they would be willing to oppose the Bill and the fact he was unable to see how divisions between Protestants and Catholics had grown. ...read more.

Personally I see the pre war period as turbulent to say the least, but they remained in government through three elections, passed groundbreaking reforms and were in power when the war began. The impact the war had on British politics was astronomical, it acted as the catalyst for the decline of the Liberals, something Dangerfield appears to ignore in his writings. The war effectively forced the Liberals to implode and split, thus making a future for a Liberal party impossible Suggesting it was the war that extinguished the flame of Liberalism and reduced Liberal England to ashes. In conclusion the Liberals did not have an easy time in government, but fought their battles valiantly, introducing social reform on the way. In the end the jackhammer blows that came with each ensuing challenge or problem toppled the white knight of Liberalism, yet I believe this was not in 1913, but during the war. The Liberals entered the war shaken, but still ready to fight, sending their trusty stead into the face of adversity, only for it to be defeated by internal problems rather than that of external issues, something I find profoundly ironic given the nature of the external turmoil the Liberals faced in the pre war years. ?? ?? ?? ?? Matt Jones History ...read more.