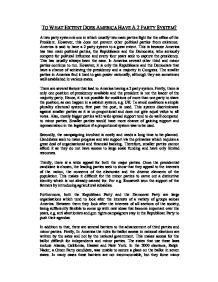 To What Extent Does America Have A 2 Party System?

TO WHAT EXTENT DOES AMERICA HAVE A 2 PARTY SYSTEM? A two party system is one in which usually two main parties fight for the office of the President. However, this does not prevent other political parties from existence. America is said to have a 2 party system to a great extent. This is because America has two main political parties, the Republicans and the Democrats, who seriously compete for political influence and every four years seek to capture the presidency. This has usually always been the case. In America several other third and minor parties continue to run. However, it is only the Republicans and the Democrats that have a chance of achieving the presidency and a majority in Congress. The smaller parties in America find it hard to gain power nationally, although they are sometimes well established in various states. There are several factors that lead to America having a 2 party system. Firstly, there is only one position of presidency available and the president is not the leader of the majority party. ...read more.

anti abortionists and gun rights campaigners stay in the Republican Party to push their agendas. In addition to that, there are several barriers to the advancement of third parties and minor parties. Firstly, In America the rules for ballot access in national elections are written by the sates and not by the national government. This makes access for the ballot difficult for independents and minor parties. The states that use these laws include Alaska, California, Hawaii and New York. In the 2000 elections, Ralph Nader, a Green Party candidate, was unable to secure a place on the ballot in seven states. In many cases these barriers are not insurmountable, but they force minor parties to devote their energies and financial resources to ballot access. Whereas, the main parties can concentrate on their campaigning. Secondly, a large number of states allow 'straight-ticket voting' where a voter can simple cast a vote for a particular party's candidate in all posts that it is contesting. This discourages the voter from looking at the entire ballot and seeing that the minor party candidates are standing for certain posts. ...read more.

Although the Republicans and the Democrats have a great deal of power as being the two major parties in America, their national committees have limited resources and power. Also there are significant regional differences within the parties. For e.g. in the northeast and on the west coast. Republicans lean toward economic conservatism and a degree of social liberalism. In the south, party supporters tend to be cultural and religious conservatives. Hence, looking at the arguments above I can clearly see that America has a two party system to a greater extent than it has a multi party system. This is because most of the time Republicans and Democrats tend to do well and gain presidency. Whereas the independents and minor parties have little or no support nationally, but tend to do well in regions such as the South where they have concentrated pockets of support. However, the major constituent of a two party system, that is government and opposition, is said to be missing from the political system in America. This proves that American political system has elements which do not make it a two party system. ...read more.