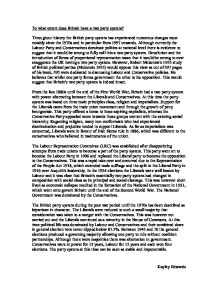 To what extent does Britain have a two party system?

To what extent does Britain have a two party system? Throughout history the British party system has experienced numerous changes most notably since the 1970s and in particular from 1997 onwards. Although currently the Labour Party and Conservatives dominate politics at national level there is evidence to suggest that it would be wrong to fully call this a two party system. Devolution and the introduction of forms of proportional representation mean that it would be wrong to over exaggerate the UK having a two party system. However, Robert Mckenzie's 1955 study of British political parties (Mckenzie 1955) would oppose this view as out of 597 pages of his book, 595 were dedicated to discussing Labour and Conservative policies. He believes that whilst one party forms government the other is the opposition. This would suggest that Britain's two party system is indeed intact. From the late 1880s until the end of the First World War, Britain had a two party system with power alternating between the Liberals and Conservatives. At this time the party system was based on three main principles class, religion and imperialism. Support for the Liberals came from the trade union movement and through the growth of petty bourgeoisie. ...read more.

Conservatives were in power for 13 years, Labour for 12 years and each won four elections. The party system at this time can be seen as stable and impenetrable. The 1970s saw this party system being challenged. The 1974 general election saw a dramatic change to the status quo with a minority Labour government and a surge in support for the Liberal Party. They achieved 19.3% of the vote, which was a post war high. Between them the Conservatives and the Labour Party only managed to secure 755 of the vote. Labour decided to call another general election in October 1974 but again received a slim majority. Gains were made, however, to the parties in Scotland and Wales. A series of by-election defeats followed for Labour and not even a pact with the Liberals, who would allow Labour to stay in office lasted long. After a vote of no confidence Margaret Thatcher won the 1979 general election and the Conservative Party began a new era of Thatcherism. Throughout the 1980s Labour underwent a period of turmoil. The left and anti-European wings of the party became more powerful and this prompted four prominent Labour figures in 1981 to form the Social Democratic Party. ...read more.

In Scotland Labour was denied a majority in both the 1999 and 2003 elections and in Wales after 1999 but not 2003. Where Labour has not gained a majority a coalition has been formed with the Liberal Democrats. It can therefore be seen that Scotland and Wales contain multi party systems. It can therefore be said that the British party system has changed significantly in the post war period. Labour and Conservatives used to dominate politics whereas now their combined vote share has decline and small parties such as the Liberal Democrats have increased their electorate. In addition nationalistic parties have become more popular since devolution has occurred. It would be inaccurate to describe Britain as having a two party system but it would be an exaggeration to say it is a multi party system. Although Labour and the Conservative Party do still dominate national politics it is also fair to say that Britain has several party systems in Scotland, Wales and Northern Ireland and at European and local level. It is also evident that since there has been more use of proportional representation there is much more evidence to suggest that Britain does have a multi party system. At present, however, the only real opposition to the current Labour government is the Conservatives thereby suggesting that the two party system is still apparent in the UK. Kayley Edwards ...read more.