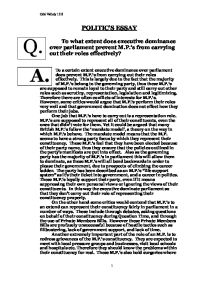 To what extent does executive dominance over parliament prevent M.P.'s from carrying out their roles effectively?

POLITIC'S ESSAY To what extent does executive dominance over parliament prevent M.P.'s from carrying out their roles effectively? To a certain extent executive dominance over parliament does prevent M.P.'s from carrying out their roles effectively. This is largely due to the fact that the majority of M.P.'s belong to the governing party, thus these M.P.'s are supposed to remain loyal to their party and still carry out other roles such as scrutiny, representation, legislation and legitimizing. Therefore there are often conflicts of interests for M.P.'s. However, some critics would argue that M.P.'s perform their roles very well and that government domination does not effect how they perform their jobs. One job that M.P.'s have to carry out is a representation role. M.P.'s are supposed to represent all of their constituents, even the ones that didn't vote for them. Yet it could be argued that many British M.P.'s follow the 'mandate model', a theory on the way in which M.P.'s behave. The mandate model means that the M.P. seems to have a strong party focus by which they represent their constituency. These M.P.'s feel that they have been elected because of their party name, thus they ensure that the policies outlined in the party's manifesto are put into effect. ...read more.

Question time also forces the government to explain its policies, and M.P.'s can catch ministers off guard with supplementary questions. However its been dismissed as a stage managed farce due to the use of planted questions that allow for the government to exploit this mechanism of scrutiny and dominate M.P.'s. Select committees also help to scrutinize the government as they enhance their critical capacity by making them more specialized. This specialized knowledge allows for select committees to have a deterrence value, help M.P.'s to influence government policy, and give M.P.'s more information about government policy. This shows that select committees are not being completely dominated by the executive, as they are carrying out their role quite effectively. Yet, many critics would argue that their role as scrutinizers is being undermined by the executive as they don't have enough resources, they have an amateurish approach, they lack power, they have limited linkage to the floor and the face that they have limited influence. In addition to these faults, M.P.'s in select committees also face interference from the whip, which picks the M.P.'s whom will sit on these committees. This shows just how executive domination can prevent an M.P.'s from carrying out his work effectively as the whip will pick a tame hand-picked bunch who will obey all they he wants them to do. ...read more.

M.P.'s legitimize the actions of government when they support the governing party during debates and votes on bills. However party loyalty and whip pressure often means that M.P.'s feel compelled to legitimize the actions and policies of the government. M.P.'s belonging to the governing party are under a lot of pressure to support the government at all times. As a consequence M.P.'s allow the government to dominate them, thus reducing the effectiveness of their roles. A great number of M.P.'s ultimately aspire to becoming members of the government. For this fact M.P.'s allow themselves to be dominated in the hope of being recognized as secure to get a job later on in the government. The executive can dominate these M.P.'s and threaten them with a loss of promotion prospects if they do not comply with what they want them to do. To conclude Austin Mitchell argues that the role of an M.P. is not one but many. This huge workload allows M.P.'s to be dominated and forced to not carry out all of their roles as effectively as they could be done if they had more resources, more time and less government interference. It could be argued that the executive does not always dominate, however the illustrations above show that largely they do dominate and effectively undermine the M.P.'s roles. Orl� Vallely 13H 1 ...read more.