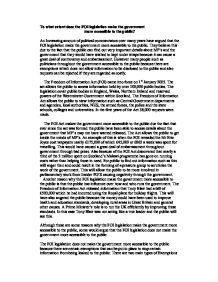 For public to find out information such as this will anger then and could result in the forming of a pressure group to scrutinise the work of the government. This will allow the public to be more involved in parliamentary work from Insider PG'S causing negativity through the government. Another reason why the FOI legislation make the government more accessible to the public is that the public has influence over how and who runs the government. The Freedom of Information Act released information that Tony Blair had a bill of �500,000 which he had incurred using the Royal plane for holiday flights. This will have also angered the public because the money could have been used to improve health and education standards, developing rural areas in Great Britain and general other causes. A Prime Minister's role is to run the UK efficiently by improving these standards. In this case Tony Blair was not acting like a true leader and the public will see this. ...read more.

An example of this is that information on murderers or paedophiles cannot be released to the general public as it may cause violence from the public to these people who have committed crimes. Another reason how the FOI legislation does not make the government more accessible to the public is that requests can be rejected if they are regarded as costing too much to compile. The present cut off price of preparing a request is �600 for central government departments and �450 for local authorities. A review of the impact of the act found requests cost central government �24.4 million a year and other public authorities �11.1 million a year. Requests will not be made if these significant numbers keep on rising especially due to the recent credit crunch. Overall The FOI legislation does make the government more accessible to the public. The public should be allowed to know information on how their country is being run and initially have a say on how to improve standards for the benefit of themselves and their country. ...read more.