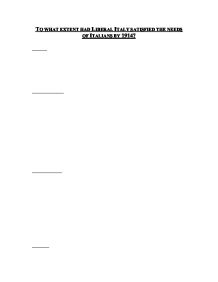 TO WHAT EXTENT HAD LIBERAL ITALY SATISFIED THE NEEDS OF ITALIANS BY 1914? One might think that the most efficient way of creating a truly united state would be to involve the people of the state, by giving the men and women a say in the matter. However the politicians who were controlling Italy, which at that time were the Liberals, disagreed completely. Politicians administrating the unification of Italy believed that the ordinary people of Italy were far too inferior and did not have the ability to participate in governmental issues. For many years Italy was faced with corruption and deceit. Bribery and incompetence were widespread within the Italian government, which later served to damage the reputation of the Liberal system within the eyes of many Italians. At this time Italy was divided into two separate parts. 'The legal Italy', which is the Italy of Parliament and the political class who ran the government, and 'The real Italy', which were the ordinary Italians with their day-to-day concerns. ...read more.

Between the years 1906 and 1914, the Liberal state took steps to improve the health standards and the living & working conditions of the lower class. The new legislation targeted many sectors of people, but the main area were the working class who were under risk of poverty, due to illness or unemployment. The state also targeted Italy's old and new generation, which in this case were the children and the old pensioners of Italy. Giolitti hoped that increase in wealth and prosperity would make the country's liberal institutes more acceptable and secure. The welfare of children was the first task undertaken by Giolitti's new government. Since the Local Education Authorities in 1902 were introduced the issue of malnourished had increased dramatically. "It is the height of cruelty to subject half starved children to the process of education", this was the report given by the Committee on Physical Deterioration. ...read more.

Under extreme pressure from Nationalists, Giolitti attacked Libya, which was then ruled by Turkey, and defeated the opposition forces. Italy was finally victorious in a war. However, many ordinary Italians had an aversion to the war, they were made to fight in a war, which they didn't comprehend. By going to war with Turkey might have reduced pressures from the far Right Nationalists, but it managed to invite heavy criticisms from the Socialists. Giolitti had to face up to a new challenge: the growth of Socialism, which was a development that startled many Italians. Some historians go in favour of Giolitti and try to argue that by 1914 Italy was on the way towards security. However some managed to point out some factorial issues, which might confront Giolitti in his efforts to make the regime more secure. Such as: * Could Giovanni Giolitti gain the support of the masses yet keep that of the traditional elites? ...read more.