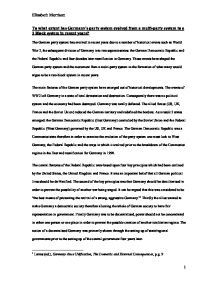 To what extent has Germany's party system evolved from a multi-party system to a 2 Block system in recent years?

To what extent has Germany's party system evolved from a multi-party system to a 2 Block system in recent years? The German party system has evolved in recent years due to a number of historical events such as World War 2, the subsequent division of Germany into two separate states: the German Democratic Republic and the Federal Republic and four decades later reunification in Germany. These events have shaped the German party system and the movement from a multi-party system to the formation of what many would argue to be a two-block system in recent years. The main features of the German party system have emerged out of historical developments. The events of WW2 left Germany in a state of total devastation and destruction. Consequently there was no political system and the economy had been destroyed. Germany was totally defeated. The allied forces (US, UK, France and the Soviet Union) reduced the German territory and redefined the borders. As a result 2 states emerged: the German Democratic Republic (East Germany) controlled by the Soviet Union and the Federal Republic (West Germany) governed by the US, UK and France. The German Democratic Republic was a Communist state therefore in order to examine the evolution of the party system one must look to West Germany, the Federal Republic and the ways in which it evolved prior to the breakdown of the Communist regime in the East and reunification for Germany in 1990. ...read more.

The German political system was based upon a 5% threshold in 1949, whereby parties could only be represented if they received this percentage of the votes. However it is important to note that in 1949 this only applied at regional level and not at national level. The second phase of development in 1953 saw fragmentation become a thing of the past. The 5% threshold was applied nationally and between 1957-63 the West German party system became one of the most stable of the Western European countries. During this time there was very little change, it was a 2+ party system consisting of the CDU, SPD and the Free Democratic Party (FDP). During this time the strong middle ground was occupied by two main parties and the voting reciprocated this. The CDU and SPD received around 90% of the vote in 1976. This resulted in the development of a triangular party system whereby the CDU, SPD and the liberal party (FDP) could all go into coalition with each other. The choice of which party to form a coalition with was dependent on specific issues for example the FDP could choose to form a coalition with whichever party supported its own beliefs and ideals. The German party system has undergone major changes "both in respect of the total number of effective parties and the ideological distance between the various political tendencies. ...read more.

However there is uncertainty over how long the two-block system will last as in theory things could change dramatically: "The stability of the two-block party system...remains questionable. In principle, the "right-block", CDU and FDP, should be cohesive, but the FDP may have become an unreliable partner...On the left, the SPD and Greens appear to have found much common ground but with the German economy increasingly under pressure, difficult decisions will have to be made over the next few years and there is not guarantee that the coalition will hold firm until the next federal election scheduled for 2006."11 Furthermore the FDP which before the emergence of the Green Party held the balance of power may play a key role in the continuance of the two-block system, "While the FDP seems to have lost its traditional position of 'King maker' in the German party system, it may still be regarded as an important player at Bundestag elections when it comes to securing the symmetric 'two-block' party system structure that emerged in the aftermath of German unification."12 Whether or not the two-block party system is strong enough to continue cannot be taken for granted as there are uncertainties on both the left and the right, "But it is difficult to see at this stage what might take its place, especially since electoral behaviour is far less certain and is likely to become even more fluid in the face of Germany's economic difficulties. ...read more.