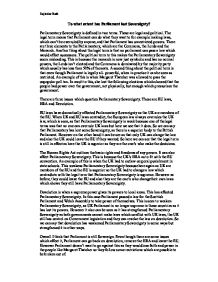 To what extent has Parliament lost Sovereignty?

To what extent has Parliament lost Sovereignty? Parliamentary Sovereignty is defined in two terms. These are legal and political. The legal term means that Parliament can do what they want to for example making laws, which can't be overruled by anyone, and that Parliament has unrestricted powers. There are three elements to the Parliamentary, which are the Commons, the Lords and the Monarch. Another thing about the legal term is that no parliament can pass a law which would affect successors. The political term to this makes the Parliamentary Sovereignty seem misleading. This is because the monarch is now just symbolic and has no normal powers, the Lords isn't elected and the Commons is dominated by the majority party which usually has less than 50% of the seats. ...read more.

So we can say that Parliamentary has lost some Sovereignty, as there is a superior body to the British Parliament. However on the other hand it can be see as that only UK can change the law and also the UK could leave the EU if they wanted. So here we can see that the legal term is still in effect as here the UK is superior as they are the one's who make the decisions. The Human Rights Act outlines the basic rights and freedoms of any person. It can also affect Parliamentary Sovereignty. This is because the UK's HRA as to fit with the EU convention. An example of this is when the UK had to outlaw corporal punishment in state schools. ...read more.

This is seen to weaken Parliamentary Sovereignty, as UK Parliament is no longer supreme in these countries as it has lost its powers. However it also can be seen as it has strengthened Parliamentary Sovereignty as both governments cannot make laws which conflict with UK laws, the UK still has control on Government legislation and they can revoke the law on devolution. So we can say that devolution has weakened Parliamentary Sovereignty is some ways but strengthened it in other ways. Overall I think that Parliament is still Sovereign. Even though there are some issues which affect it, Parliament can go back on devolution, remove the HRA and leave the EU. However Parliament doesn't want to go against this as they would lose faith and power in the people like Margaret Thatcher so they follow some restrictions which are possible to be broken out of. Rajinder Bath ...read more.