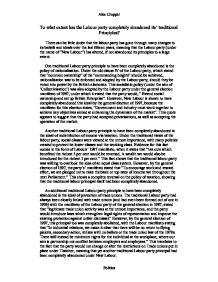 To what extent has the Labour party completely abandoned its' traditional Principles?

To what extent has the Labour party completely abandoned its' traditional Principles? There can be little doubt that the labour party has gone through many changes to its beliefs and ideals over the last fifteen years, meaning that the Labour party (under the name of "New Labour") has altered, if not abandoned its principles to a large extent. One traditional Labour party principle to have been completely abandoned is the policy of nationalisation. Under the old clause lV of the Labour party, which stated that "common ownership" of the "commanding heights" should be achieved, nationalisation was to be enforced and adopted by the Labour party, should they be voted into power by the British electorate. This socialistic policy (under the aim of 'Collectivisation') was also adopted by the Labour party under the general election manifesto of 1987, under which it stated that the party would, "Extend social ownership and set up British Enterprise". However, New Labour is shown to have completely abandoned this ideal by the general election of 1997, because the manifesto for this election states, "Government and industry must work together to achieve key objectives aimed at enhancing the dynamism of the market". ...read more.

This shows a complete reversal on the policy of taxation, showing that the traditional labour principal itself had been completely abandoned. An additional traditional Labour party principle to have been completely abandoned is the ideal of protection of trade unions. The traditional Labour party had always been closely linked with trade unions (and had even been formed out of one in 1906) with the manifesto of the Labour party of the general election in 1987, stated that "legitimate trade union activity was at the utmost importance, and the party would introduce laws which strengthen legal rights of representation and improve the existing protection against unfair dismissal." However, by the general election of 1997, this principal too was completely abolished, with the Labour manifesto stating that "In industrial relations, we make it clear that there will be no return to flying pickets, secondary action, strikes with no ballots or the trade union law of the 1970s. There will instead be minimum rights for the individual at the workplace, where our aim is partnership not conflict between employers and employees." ...read more.

This appears to defy and completely abandon the policy of spending more on public services, to achieve equality. Having said this however, there are some traditional Labour principles that new labour have not completely abandoned. Many traditional Labour principal (like that of abolishing the House of Lords due to the fact that it was not elected by the electorate) have merely been adapted. Instead of abolishing the House of Lords, constitutional reforms have been bought in by New Labour, with hereditary peers being abolished. Furthermore, the traditional principle of unilateral disarmament has been amended, with the view of multilateral disarmament taking its place instead. Additionally, it can be argued that the traditional Labour policy of equality has been adapted, as even though taxation and public spending has gone away from this area, new labour have introduced minimum wage and tax credits to combat this fact. In conclusion, the labour party has completely abandoned its traditional principles to a large extent; however, many traditional policies still remain in a different form. These policies include disarmament and reform in the House of Lords. Alec Cropper Politics ...read more.