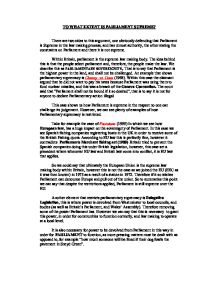 To what extent is Parliament supreme?

TO WHAT EXTENT IS PARLIAMENT SUPREME? There are two sides to this argument, one obviously defending that Parliament is Supreme in the law making process, and has utmost authority, the other stating the constraints on Parliament and there it is not supreme. Within Britain, parliament is the supreme law making body. The idea behind this is that the people select parliament and, therefore, the people make the law. We describe this as PARLIAMENTARY SOVEREIGNITY, That is to say that Parliament is the highest power in the land, and shall not be challenged. An example that shows parliamentary supremacy is Cheney .vs. Conn (1968). Within this case the claimant argued that he did not want to pay his taxes because Parliament was using them to fund nuclear missiles, and this was a breach of the Geneva Convention. The court said that "Parliament shall not be bound if it so desired", that is to say it is not for anyone to declare Parliamentary action illegal. This case shows us how Parliament is supreme in the respect no one can challenge its judgement. However, we can see plenty of examples of how Parliamentary supremacy is restricted. Take for example the case of Factatane (1990) In which we see how European law, has a huge impact on the sovereignty of Parliament. In this case we see Spanish fishing companies registering boats in the UK in order to receive some of the British Fishing quota. ...read more.

Bell (1961). Where the defendant was displaying a "flick knife" in the window of his shop with a price tag, but, when question he claimed he was merely displaying it and would have refused any offers made on the item. He was found innocent as literally to sell something is an "invitation to treat" that is making an offer, and the seller may refuse that offer if he so wishes. 2. The more flexible approach - where judges seek to establish the meaning of the law, then apply it to the facts of the case. One could say that this is a restriction as it is down to the judges, opinion over what Parliament means, therefore, we establish that the courts may not always be applying the law, as Parliament so wished them to. Another restriction imposed on Parliamentary supremacy is Human rights. It is argued that there are certain fundamental rights that are possessed by every human being. Logically, one might argue that any law which took away such rights would be invalid. In British Law this is not the case, Parliament could pass any law it wished to pass - however immoral that law might be, and, if the statute is clear, the courts would be obliged to apply that law. The Human Rights Act (1998) came into force in October 2000. ...read more.

The Human Rights Act will not detract from this power. The constraints it exercises over Parliament are Political not Legal." Probably the least important, and final restriction Parliament have over their supremacy is that of Political Reality. The House of Commons is made up of people who are voted into power, the House of Lords now has little real power. The term 'Parliamentary supremacy' therefore tends to mean in practice supremacy of the political party having for the time being a good majority in the House of Commons. The leaders of that party, The Cabinet, decide on what legislation will be introduced. Members of Parliament are instructed when and how to vote by the party whips. The limit on what Parliament can do is therefore in reality set by the views of the Cabinet as to the best political decision. Having said that, a great deal of law is not at all political in content and similar rules would be constructed no matter which political party was in power. To Conclude, One can say that there are restraints on Parliament, and these do affect its supremacy, and sovereignty. However, in my opinion we can say that although these restrictions are there, Parliament remains the supreme law maker and highest body within this country even over Europe. I believe this as Parliament still has the power to pass a statute allowing us to leave the EU, until this is taken from Parliament, I feel it is still the most powerful body in this country. ...read more.