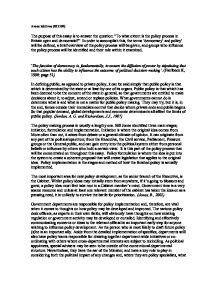 To what extent is the policy process in Britain open and democratic?

The purpose of this essay is to answer the question: "To what extent is the policy process in Britain open and democratic?" In order to accomplish this, the terms 'democracy' and policy' will be defined, a brief overview of the policy process will be given, and groups who influence the policy process will be identified and their role within it examined. 'The function of democracy is, fundamentally, to ensure the diffusion of power by stipulating that each citizen has the ability to influence the outcome of political decision-making'. (Fierlbeck K, 1998: page 51) In defining public, as opposed to private policy, it can be said simply that public policy is that which is determined by the state or at least by one of its organs. Public policy is that which has been deemed to be the concern of the state in general, so that governments are entitled to make decisions about it; to adjust, amend or replace policies. What governments cannot do is determine what is and what is not a matter for public policy making. They may try, but it is, in the end, forces outside their immediate control that decide where private ends and public begins. So that popular demand, global developments and economic determinants all affect the limits of public policy. (Jordan, A. G. and Richardson, J.J., 1987) The policy making process is usually a lengthy one. Bill Jones identified three main stages; initiation, formulation and implementation. Initiation is where the original idea comes from. ...read more.

Outside of government a wide variety of groups may get involved. Ideally, in a democracy, the whole of society should be involved. Practically, certain groups have better access and are better suited to translating their ideas into methods acceptable to, and usable by, the government machine. Think tanks, as the name suggests, have as their whole raison d'�tre deliberating over societal and economic ills and thinking up new ways of overcoming them. Approaching society from across the political spectrum, the more established think tanks are prolific in publishing pamphlets of an often original nature. They also act as sponsoring bodies for seminars and lectures. Purportedly independent of outside influences to maintain their credibility, most, nevertheless, have close links with a particular political party. The Institute for Public Policy Research (IPPR) and Demos were closely linked with the rise of the New Labour project, with the Centre for Policy Studies (CPS) and the Social Market Foundation (SMF) maintaining firm links with the Right. (Parsons, W., 1995) Established bodies such as the Confederation of British Industry (CBI) or Trades Union Congress (TUC) maintain regular contact with ministers. Well-funded teams in regular contact with ministers and civil servants are generally a key factor in policy development. These reputable and high profile bodies will often be introduced into policy formation early as government attempts to kite-fly policy thoughts with key opinion formers and campaigning bodies. ...read more.

Nevertheless, pressure groups form a vital part of our democratic process, providing government with an indication of the strength of public belief in an issue, as well as bringing a more focused argument to the issue. Pressure groups provide a useful counterweight for public opinion to campaign against the power of commercial interests. The sum being very much greater than the individual parts, pressure groups allow private citizens to make their voices heard in government. Small, affordable contributions allow the financing of human interest campaigns to balance those driven by the profit to be derived from government. (Dearlove, J. and Saunders, P., 2000) "The interest dynamic is ex officio selfish and, while interest groups have a valuable and often expert contribution to make to policy making, to allow them too great a sway over policy decisions is to subordinate the general public interest to the interest of a particular group." (James, S., 1997: page 212) Political parties set much store by publicising the importance they attach to their grass roots' contribution to policy development. All parties have a system in place whereby party members may pass ideas up the chain for adoption as policy. From the Labour Party Policy Forum or the Conservatives "Listening to Britain" road shows, through to resolutions at Conference, each party increasingly attempt to portray itself as THE democratic party, as the central policy machine simultaneously takes a firmer grip on internal debate. The fear of showing division in front of a rampant press pack means that single-issue campaigning bodies increasingly take responsibility for driving forward the innovative agenda. (Parsons, W. ...read more.