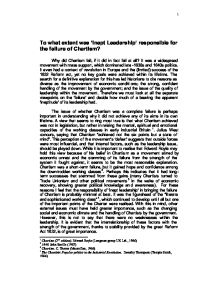 To what extent was &amp;#145;Inept Leadership&amp;#146; responsible for the failure of Chartism?

To what extent was 'Inept Leadership' responsible for the failure of Chartism? Why did Chartism fail, if it did in fact fail at all? It was a widespread movement with mass support, which dominated late-1830s and 1840s politics. It even had a context of revolution in Europe and the (limited) success of the 1832 Reform act, yet no key goals were achieved within its lifetime. The search for a definitive explanation for this has led historians to cite reasons as diverse as the improvement of economic conditions; the strong, confident handling of the movement by the government; and the issue of the quality of leadership within the movement. Therefore we must look at all the separate viewpoints on the 'failure' and decide how much of a bearing the apparent 'ineptitude' of its leadership had. The issue of whether Chartism was a complete failure is perhaps important in understanding why it did not achieve any of its aims in its own lifetime. A view that seems to ring most true is that what Chartism achieved was not in legislation, but rather in raising the mental, spiritual and emotional capacities of the working classes in early industrial Britain1. ...read more.

The failure of Chartism to gain any parliamentary support, or in other key areas, was another reason for its failure, as it would have been perceived as going nowhere. This factor can be more attributed to failings in leadership as O'Connor's attempt to become MP for Oldham ended in defeat, while the presentation of a petition with over 3 million fake signatures in 1848, would have done little to increase political integrity for Chartism, even though Chartists would have seen the day as successful, having passed without violence. Of course, this error of judgement on O'Connor's part led to severe mocking of the movement and increased tension with William Lovett. The government amplified this failing, and so ridicule was placed upon the movement. Again a slight failing was sufficient for the strong government to undermine the movement and its aims. While it is of great importance to emphasise the assured strength of the government, it is also impossible to talk about the failure of Chartism without referring to the economic and social changes that gave the movement its context. It is rather simplistic (and in my opinion wrong) ...read more.

Of course there were weaknesses amongst the leadership, but there is every indication that the movement could have succeeded, such was the nature and quantity of support. This was inspired by O'Connor and his "Northern Star", therefore making him both essential and burdensome (due to his splits with other Chartist leaders) to the movement. Likewise, the context both aided and hindered Chartism. The greatest achievement of the leaders was to bring political ideas filled with hope to the working classes, which was in my opinion a success for a movement that was perhaps 'ahead of its time'. 1 Chartism (2nd edition). Edward Royle (Longman group UK Ltd., 1986) 2 1848. John Saville (1987) 3 Chartism. C. Thorne (Macmillan, 1966) 4 The Chartists: Popular politics in the Industrial Revolution. Dorothy Thompson (Temple Smith, 1984) 5 London Chartism, 1838-1848. David Goodway (Cambridge University Press, 1982, pp.129-43) 6 The origins and nature of Chartism. Edward Royle (History Review, 1992, pp.30-34) 7 Taking Chartism Seriously. Clive Behagg (Modern History Review, 1996, pp.2-4) 8 Labour and Reform, Working Class Movements : 1815-1914. Clive Behagg (Hodder & Stoughton, 1991) 9 A letter to the Northern Star. Female Chartists of Manchester in 1842. 10 Chartism. Edward Royle....(Longman, 1986) 11 see above (10) 12 Taking Chartism Seriously. Clive Behagg (Modern History Review, 1996) 13 1848. John Saville (1987) 1 1 ...read more.