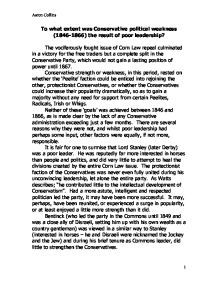 To what extent was Conservative political weakness (1846-1866) the result of poor leadership?

To what extent was Conservative political weakness (1846-1866) the result of poor leadership? The vociferously fought issue of Corn Law repeal culminated in a victory for the free traders but a complete split in the Conservative Party, which would not gain a lasting position of power until 1867. Conservative strength or weakness, in this period, rested on whether the 'Peelite' faction could be enticed into rejoining the other, protectionist Conservatives, or whether the Conservatives could increase their popularity dramatically, so as to gain a majority without any need for support from certain Peelites, Radicals, Irish or Whigs. Neither of these 'goals' was achieved between 1846 and 1866, as is made clear by the lack of any Conservative administration exceeding just a few months. There are several reasons why they were not, and whilst poor leadership had perhaps some input, other factors were equally, if not more, responsible. ...read more.

He did try to heal the wounds of 1846, by deliberately denouncing protection as 'not only dead, but damned!', but Gladstone and other former Conservatives mistrusted and detested him, due to both prejudice and anger at his scathing attacks on Peel, during the Corn Law debates, and were therefore unwilling to rejoin him. There was also some lack of confidence from within his own ranks, as was exemplified by the reluctance of the party to support his and Bentinck's stance;"where is your Christianity if you do not let in their Judaism?", over the issue of tolerance towards Jewish membership of Parliament (a practising Jew was elected for the City of London). The subsequent criticism from the rest of the party, mostly backbench squires, culminated in Bentinck's resignation. However, Disraeli made steady progress, arguably as quickly as was possible, and in this period laid the foundations for the Conservative comeback afterwards. ...read more.

In 1851, Derby failed to assemble a government due to lack of talent, and the 1852 cabinet was known as "who, who?". Disraeli, Chancellor of the Exchequer, was known to have admitted to knowing nothing about his position, and his budget was defeated, spelling the end of the Tories' brief office. One can conclude that Derby's Conservative leadership was weak, and that it did have a detrimental effect on the fortunes of the party. However, as Derby did little, and Disraeli was leader in the Commons, he was the effective leader, and his leadership was quite strong. Furthermore, there were other, more important factors in ensuring that the Tories were weak, mainly that the divisions caused by the repeal of the Corn Laws were so great that they could not be healed (meaning a period of recovery was inevitable), as well as poor electoral results, lack of trust in Disraeli (some due to prejudice) and lack of able, protectionist politicians. ?? ?? ?? ?? Aaron Collins 1 ...read more.