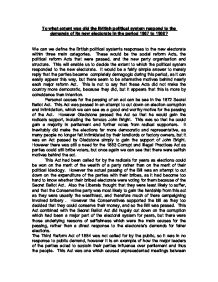 To what extent was did the British political system respond to the demands of its new electorate in the period 1867 to 1900?

To what extent was did the British political system respond to the demands of its new electorate in the period 1867 to 1900? We can we define the British political system's responses to the new electorate within three main categories. These would be the social reform Acts, the political reform Acts that were passed, and the new party organisation and structure. This will enable us to decide the extent to which the political system responded to the new electorate. It would be a fairly simple answer to merely reply that the parties became completely demagogic during this period, as it can easily appear this way, but there seem to be alternative motives behind nearly each major reform Act. This is not to say that these Acts did not make the country more democratic, because they did, but it appears that this is more by coincidence than intention. Personal causes for the passing of an act can be see in the 1872 Secret Ballot Act. This Act was passed in an attempt to cut down on election corruption and intimidation, which we can see as a good and worthy motive for the passing of the Act. However Gladstone passed the Act so that he would gain the radicals support, including the famous John Bright. ...read more.

So the 'Arlington Street compact' was agreed in which the Liberals attained the extension of the franchise, allowing Gladstone to maintain his support, and in return Salisbury's redistribution act was passed, allowing the Conservatives to gain more single-member constituency seats. Once again we see that this was not based upon what the public wanted, this was what the parties wanted. It was an underhand meeting allowing both the Conservative party, and Gladstone to gain from it. So we can see that there do not appear to be many examples of demagoguery in the political reform Acts, but it is also hard to find examples of the governments direct response to the new electorate's demands in social reform Acts. Social reforms by their very definition should be for the benefit of all the community, but we see that the government did not always seem to agree with this definition, as we can infer through the Bills that they legislated. The Artisans' Dwelling Act was an act which empowered local authorities to buy land to build or re-house the lower classes who lived in impoverished conditions. The government, when necessary, could supply small loans to the councils for the work. This appears from the outside to be an Act which shows caring for the community, but it was only a permissive Act. ...read more.

This meant that the lower classes had to find another way to represent themselves, and they did this through the formation of group which eventually found common ground in the form of the Labour Representative Committee. Analysis of the motives behind the major political and social reform acts show that the political system responded very little to the new electorate. It is evident that there was some degree of reply from the government in so much as the issues made the agenda, but very rarely was an act in direct response to public outrage. It appears that the case is far more complicated, and that there is never the one simple answer. The motives behind the acts are usually for the personal political gain of members of the parties, rather than for the good of the public. The very fact that the Labour Representative Committee emerged shows that much of the new electorate, mainly the lower classes, felt that they were not being fairly represented in parliament. We can see that this is true as well, as Salisbury redistributed the seats so that the working classes had less influence over the outcome of the elections. The only direct response to the new electorate was the party organisation as this was to try to gain votes. So it is fair to say that the government responded to the new electorate to a certain extent, but obviously not enough. ...read more.