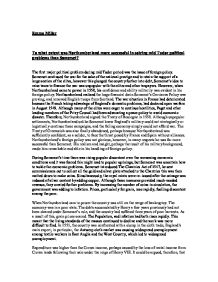 To what extent was Northumberland more successful in solving mid Tudor political problems than Somerset?

Emma Miller To what extent was Northumberland more successful in solving mid Tudor political problems than Somerset? The first major political problem during mid Tudor period was the issue of foreign policy. Somerset continued the war for the sake of the national prestige and to retain the support of a large section of the elites, however this plunged the country further into debt, Somerset's idea to raise taxes to finance the war was unpopular with the elites and other taxpayers. However, when Northumberland came to power in 1550, his confidence and ability militarily was evident in his foreign policy. Northumberland realised the huge financial drain Somerset's Garrisons Policy was proving, and removed English troops from Scotland. The war situation in France had deteriorated because the French taking advantage of England's domestic problems, had declared open warfare in August 1549. Although many of the elites were eager to continue hostilities, Paget and other leading members of the Privy Council had been advocating a peace policy to avoid economic disaster. Therefore, Northumberland signed the Treaty of Boulogne in 1550. Although unpopular settlements, Northumberland unlike Somerset knew England's military could not strategically or logistically continue these campaigns, and the failing economy simply could not afford war. The Treaty of Greenwich was also finally abandoned, perhaps because Northumberland was sufficiently confident, as a solider, to face the threat posed by France and Spain without alliances. Northumberland's foreign policy was not glorious, however, in many respects he was far more successful than Somerset. ...read more.

At the same time, the administration tried to improve the economic situation and relieve poverty and distress. The existing anti-enclosure legislation was rigorously enforced, and the unpopular enclosure commission was withdrawn. Acts protecting arable farming were passed and usury was made illegal. Prosecutions for depopulation increased during Northumberland's rule, and under the Poor Law of 1552 collection were made from wealthy individuals and distributed amongst the poor of the parish. His realism, in contrast to the Duke of Somerset's ignorant idealism, converted concern for social justice to practical effective social legislation. In this respect, the Duke of Northumberland was more competent in dealing with social injustice. The issue of Religious policy was a major political problem for Somerset. He had to take some action over religious reform if he were not to lose the support of the Protestant activists. Such a loss of support might allow a catholic revival, which would endanger their hold on power. Yet if they went too far the reformers might provoke the Catholics into open rebellion. This was the reason Somerset's religious policy had been a compromise. Somerset removed the heresy laws, which allowed people to discuss religion freely without fear of arrest, while the ending of censorship on printing and publishing enabled the circulation of books and pamphlets on religion. The removal of the restrictive laws encouraged widespread debate over religion. Public meetings frequently ended in disorder and riots, with attacks on churches to break statues of saints and other catholic images. ...read more.

Even before his arrest it was clear that Somerset was discredited and had lost control of the political situation. Many members of the Privy Council were offended by his aloofness and his arrogance in using his own household instead of the council to conduct business. He had undermined the confidence of the aristocracy and the gentry because of his inept handling of the popular uprising. Northumberland was faced by equally pressing social problems. The debasement of the coinage in 1551 raised inflation still further. Grain prices rose rapidly; a situation worsened by below average harvests. In 1550, the country was still simmering after the recent popular uprisings and was further unsettled by the political power struggle among the privy councillors. Consequently, the administration had to act carefully and skilfully if further serious disorder was to be avoided. Here again the Northumberland administration showed a much more positive approach than that adopted by Somerset. In conclusion, it is difficult to assess whether Northumberland was more successful in dealing with political problems than Somerset because Northumberland came to power in 1550 and not 1547 and was able to adopt different policies with the full knowledge of the problems and errors of Somerset's policies. For example his ignorance of the importance of privy council his continuation of the war his unpopular laws and proclamations he passed undermined the confidence of the aristocracy and led to rebellions from the working class and his religious reforms that alienated even moderates in the conservative party. However, similarities can be drawn between Somerset and Northumberland it was said that both were ambitious, greedy and corrupt. Although their methods of government were very different, their policies and priorities were very similar ...read more.