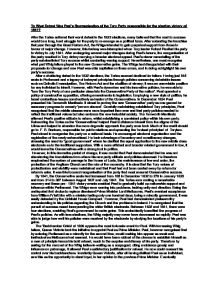 To What Extent Was Peel's Reorganisation of the Tory Party responsible for the election victory of 1841?

To What Extent Was Peel's Reorganisation of the Tory Party responsible for the election victory of 1841? After the Tories suffered their worst defeat in the 1832 elections, many believed that the road to success would be a long, hard struggle for the party to re-emerge as a political force. After extending the franchise that year through the Great Reform Act, the Whigs intended to gain perpetual support from those in favour of major change. However, this fantasy was interrupted when Tory leader Robert Peel led his party to victory in July 1841. After undergoing several major changes during Peel's tenure, the reorganisation of the party resulted in Tory victory carrying a broader electoral appeal. Peel's clever remodelling of the party substantiated Tory success whilst combating waning support. Nevertheless, one must recognise what part Whig failure played in the new Conservative gains. The Whigs had disappointed with their proposals for change and now Peel was able capitalise on these errors, and in doing so highlight his own party's success. After a shattering defeat in the 1832 elections, the Tories seemed destined for failure. Having just 185 seats in Parliament and a legacy of betrayed principles through policies concerning debatable issues such as Catholic Emancipation, The Reform Act and the abolition of slavery; it was an unenviable position for any individual to inherit. ...read more.

By 1841, the Conservative seats had increased from 185 in December 1832 to 279 in January 1835 and from 314 to 367 between August 1837 and July 1841. The Tories were making a remarkable recovery and these pre - 1941 victory events enabled Peel to gradually build up nationwide support and influence within Parliament. The Whigs were running into problems, lacking unity and direction. Being the undisputed first choice to replace dismissed Prime Minister Lord Melbourne, Peel's eventual acceptance from William IV left him with a ministry lasting only one hundred days; being a minority government, it was easily defeated by the Lichfield House Compact. However, Peel had demonstrated praiseworthy understanding in his policies regarding the Church and the problems in Ireland. He recognised that the pursuit of success meant incorporating the wider British electorate. Between 1832 and 1841, there were four elections, enabling Peel's government to make gains. This undoubtedly benefited the progress of Peel's policies. As with less elections, the Whig majority may never have decreased so rapidly. Peel was able to judge how well his policies were received by the electorate by studying the locations of his party's gains. The 'Bedchamber Crisis' of 1839 appears the most fortunate event for Peel. With increasing Whig failure, Queen Victoria took the initiative to appoint Peel as Prime Minister. ...read more.

Such divisions led to Grey's resignation, and the Whigs suffered long-term damage. This platform allowed Peel to declare his Tamworth Manifesto and make Conservative gains, introducing his new 'Conservative' principles. In Parliament, the Whig's majority relied upon an alliance with the Irish Catholics led by O'Connell and the radicals. Peel placed a fear on the public radar implying that if the alliance continued, these radical groups would invade the government and the political status quo would be in chaos, starting a revolution from above. Now struggling to cope with economic depression -Peel had been highlighting Whig economic shortfalls and budget deficits-the rise of Chartism and the Conservative promotion of a radical take over, the Whigs were in dire straits. Without Peel's illumination of these Whig shortcomings, they may have been forgotten. It was the shrewd judgement of Peel and his other political agents, which emphasised Whig failures. Overall, it appears that it mostly fell upon astute judgement and purposeful leadership that won the 1841 election for the Tories. By broadening electoral appeal through demonstrating a move towards social and economic reform, Peel understood that his cabinet would encompass the desire for change. Triumph occurred through the reorganisation and rebranding of the party as it opened up a new avenue of politics. By cleverly exploiting Whig weaknesses, the Whigs lost any momentum they had gained from the Reform Act wins. Peel's skilled oratory and clear guidance from Bonham allowed Conservatism to become celebrated and thus was the cherry for and 1841 victory. ...read more.