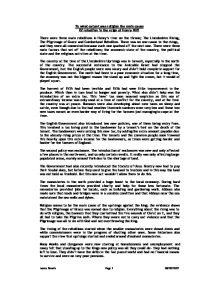 To what extent was religion the main causeOf rebellion in the reign of Henry VIII?

To what extent was religion the main cause Of rebellion in the reign of Henry VIII? There were three main rebellions in Henry's time on the throne; The Lincolnshire Rising, The Pilgrimage of Grace and Cumberland Rebellion. There was no one cause to the risings, and they were all connected because each one sparked off the next one. There were three main factors that set off the rebellions; the economic state of the country, the political state and the religious activities at the time. The country at the time of the Lincolnshire Uprisings was in turmoil, especially in the north of the country. The successful resistance to the Amicable Grant had stopped the Government, but the English people were now weary and didn't hold complete support for the English Government. The north had been in a poor economic situation for a long time, the economy was not the biggest reason the stand up and fight the crown, but it would of played a part. The harvest of 1535 had been terrible and 1536 had seen little improvement in the produce. Which then in turn lead to hunger and poverty. What also didn't help was the introduction of an extra tax. This 'new' tax soon aroused suspicion as this use of extraordinary income was only used at a time of conflict for the country, and at the time the country was at peace. Rumours were also developing about new taxes on sheep and cattle, even though due to the bad weather livestock numbers were very low and these two new taxes meant an even harder way of living for the farmers just managing to cope at the time. ...read more.

In many ways the rebellion can be seen as a standing of many different groups of people. The demands that Aske presented show this, but most of them are religious based. The risings started due to the taxes, the bad harvest, the introduction of Protestant methods in church, and the dissolution of the monasteries and the dislike of Cromwell and his new policies. Religion, the economy and the political issues of the time all added up to the revolt. However, the amount of people that took part in the revolt depended on the issue that they weren't happy about. For example, the people that didn't like the closing of the monasteries. This would have angered nearly everyone living near them and so they would have joined the 'Pilgrimage'. People going to church and finding that there have been Protestant views entered into the church might find it offensive, but some might gin and bear it. The fact that it was named The Pilgrimage of Grace seems to hint that Aske and others that started it only felt that it was meant to be a purely religious affair and that the other groups that joined in used this as a front for their anger. How Serious Was The Threat Of Rebellion To The Government Of Henry VIII? In Henrys reign there were three main rebellions. The Lincolnshire Rising, The Pilgrimage of Grace and the Cumberland Revolt. The first and second rebellions were the most serious while the last one was an after thought, trying to use the last of the anger for its cause, but by then, most people had had enough of fighting. ...read more.

Even some nobles in Government weren't happy with the policies that were being passed through it. The fact that the Government had no power to stop a huge enemy force being created was proof enough that the Government had lost all control in the north. The failure to reassemble another army to attack the 30,000 odd pilgrims also showed as a weakness on their part. However, the ability to calm down 30,000 rebels without blood shed shows that the Government still could act quickly and very efficiently when they really had to proves that they weren't completely useless. The Lincolnshire Rebellion was also a serious threat to the Government. Thanks to Henry, the rebels soon turned and went home. There were 40,000 of them, but not many of them were armed and all ready to fight. The danger of it was the hope and inspiration that this rebellion created for the Pilgrimage of Grace. This rebellion spurred on Aske to form another rebel army, albeit peaceful, but an army nevertheless. By 1537, the Government and Henry proved that they had learned a lesson from the past few years to act quickly and decisively to extinguish any uprising. Their actions saw the end of Aske and many other important figureheads in the rebellions of October 1536 executed. If the three rebellions actually lead to a battle, there would have been no doubt that Henry would have been in some trouble, especially if the Pilgrims worked their way down the country towards London. The Government in this instance would be in serious trouble and would have had to give of Government to these peaceful rebels. James Dennis Page 1 08/05/2007 ...read more.