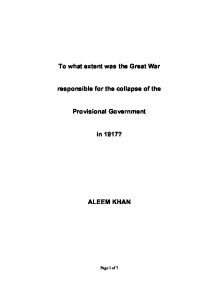 To what extent was the Great War responsible for the collapse of the Provisional Government in 1917?

To what extent was the Great War responsible for the collapse of the Provisional Government in 1917? ALEEM KHAN The Provisional Government assumed control of Russia following the abdication of the Tsar Nicholas II. It only had a brief period in power lasting about seven months. Historians have disputed the main cause for its failure, Marxist historians, such as John Reed; have rewarded it to the Bolshevik's effective propaganda machine, whilst more revisionist historians, such as Christopher Read, take a more encompassing position on the issue. They lay blame at a range of factors such as the First World War and the dual authority in relation to the Petrograd Soviet. Revisionist historians have also benefited from the post-glasnost era and hence have both greater access to more sources as well as the advantage of hindsight. To understand the reasons for the collapse of the Provisional Government it is crucial to be aware of the events leading up to the October Revolution and the atmosphere politically and socio-economically at the time. The year 1917 was a turbulent year of strikes, bad harvests and inflation. 'Week by week food became scarcer'1 and any that was available usually went to the soldiers. Russian agriculture was primitive and machinery was rarely used hence production was not efficient. ...read more.

The February Revolution was indeed important in the War; America's joining would not have occurred had it not been for the change of regime, since it did not want to support an anti-democratic autocracy. Therefore, the Provisional Government was crucial to the war and had it not been for the joining of the USA, the Germans might not have been as willing to sign a peace deal, following the October Revolution, helping to consolidate Bolshevik power. In conclusion, the Provisional Government lacked both authority and legitimacy, which were both characteristics of the Petrograd Soviet. Elections or some sort of approval was needed to give the government these features. The issue of land reform needed addressing and historians have seen this as an important factor in the government's loss of popularity. Furthermore, the propaganda from opposition groups, in particular the Bolsheviks, was effective in destroying any respect for the Provisional Government. Their liberal policies enabled this, which were unavailable to democratic countries during times of war. Kerensky was initially popular but the war damaged his image. The Great War created a situation of chaos and anarchy in Russia and government policy at the time did nothing to aid the situation. Its collapse was a result of a variety of factors and reasons but the far-reaching effects of the war were to have devastating results in both social and economic quarters. Moreover, the war only helped increase the opposition to the government and led to their downfall in October 1917. ...read more.