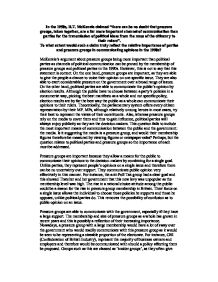 To what extent would such a claim truly reflect the relative importance of parties and pressure groups in communicating opinions in the 1990s?

In the 1950s, R.T. McKenzie claimed "there can be no doubt that pressure groups, taken together, are a far more important channel of communication than parties for the transmission of political ideas from the mass of the citizenry to their rulers". To what extent would such a claim truly reflect the relative importance of parties and pressure groups in communicating opinions in the 1990s? McKenzie's argument about pressure groups being more important than political parties as channels of political communication can be proved by the membership of pressure groups and political parties in the 1990s. However, this is not to say that this statement is correct. On the one hand, pressure groups are important, as they are able to give the people a chance to voice their opinion on one specific issue. They are also able to exert considerable pressure on the government over a broad range of issues. On the other hand, political parties are able to communicate the public's opinion by election results. Although the public have to choose between a party's policies in a consumerist way, picking the best manifesto as a whole and not specific policy, election results are by far the best way the public as a whole can communicate their opinions to their rulers. ...read more.

The membership and size of pressure groups as a whole has grown in recent years and this is possibly a reflection of their increasing importance. Nowadays, a pressure group with a large membership would have a lot of sway over the government who would readily communicate with this pressure group as it would be seen to be representing a sizeable proportion of the electorate. For instance, CBI (Confederation of British Industry), represent the majority of business owners and employers and therefore would be communicated with should a policy affecting them be proposed. Groups such as this are classed as 'insider groups', as they often give advice to the government on policy implementation and therefore work, to some extent, inside the political system. Nevertheless, political parties still enjoy considerable importance in the communication between government and the public. The mass citizenry are able to communicate their ideas very effectively at the polls. Although they must decide on a group of policies as opposed to selecting their own, it is generally thought that a voter supports most of the policies of its chosen party. ...read more.

The representation, by MPs, of their electorate is an important part of political life as it allows smaller voices to be heard in the political din. By way of conclusion, it is fair to say that political parties offer more in the way of communication with the general public. The election is the strongest means of communicating directly with the rulers that the mass citizenry have. This is strengthened by the role the MPs they vote in can have in publicising an issue in parliament. Pressure groups do offer single issue representation to ordinary people, but they do not have the same power (and therefore importance) as political parties. It is important to understand that sometimes, though, the borders dividing political parties and pressure groups can be lacking clarity sometimes, take the examples of the Referendum Party and the Green Party. The role of the media is an important factor when considering the communication of opinions in the 1990s. Political parties receive much more coverage than pressure groups from the media, generally speaking. This could be a good indication of the importance of parties in comparison to pressure groups. All in all, although parties are the most important channel of communication between the populace and the government, pressure groups strengthen this interaction. ...read more.