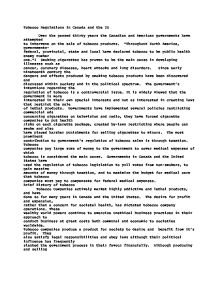 Tobacco Regulations in Canada and the US.

Tobacco Regulations in Canada and the US Over the passed thirty years the Canadian and American governments have attempted to intervene on the sale of tobacco products. "Throughout North America, governments- federal, provincial, state and local have declared tobacco to be public health enemy number one."1 Smoking cigarettes has proven to be the main cause in developing illnesses such as cancer, coronary diseases, heart attacks and lung disorders. Since early nineteenth century the dangers and effects produced by smoking tobacco products have been discovered and discussed within society and in the political spectrum. The government's intentions regarding the regulation of tobacco is a controversial issue. It is widely viewed that the government is more interested in their own special interests and not as interested in creating laws that restrict the sale of lethal products. Governments have implemented several policies restricting commercial ads concerning cigarettes on television and radio, they have forced cigarette companies to put health risks on each cigarette package, created by-laws restricting where people can smoke and also have placed harsher punishments for selling cigarettes to minors. The most prominent contribution to government's regulation of tobacco sales is through taxation. Tobacco companies pay large sums of money to the government to cover medical expenses of which tobacco is considered the main cause. Governments in Canada and the United States have used the regulation of tobacco legislation to pull votes from non-smokers, to gain massive amounts of money through taxation, and to maximize the budget for medical care that tobacco companies must pay to compensate for federal medical expenses. Brief History of tobacco Tobacco Companies actively market highly addictive and lethal products, and have done so for many years in Canada and the United States. ...read more.

educate the general public on how the tobacco companies are providing a dangerous product and can be extremely harmful to the human body. This type of money hording by the government is not only seen while addressing the United States, but also the way Canada enforced tobacco taxes. In 1986 smokers paid more in tobacco taxes than they cost the health care system. 8 As the Canadian and American governments raise taxes on tobacco products their income of revenue increases. Therefore, why would governments lower taxes on tobacco when they are able to benefit from it's sales. In 1978 smokers in Ontario cost the government between $21.5 and $39.1 million but paid $485 million in taxes. The government implemented this increase in taxation to pay for the increased health care costs that smoking weighs on the government. However, it is extremely contradictive to solely tax tobacco companies when there is scientific evidence that shows fast food chains are also a major contributor to disease and poor health. Critics charge, however, that "sin taxes" on products such as alcohol and cigarettes disproportionately affect low-income and minority communities. Ed Meyers of the Washington, D.C.-based Citizens for Tax Justice says that cigarette taxes are "very regressive" and fall "hardest upon those with the least ability to pay." Meyers says, "We are not convinced the tax code is the place to make social or health policy."10 There does appear to be an irony in the Canadian policy which emphasizes a focus on tobacco companies rather than individual smokers relying heavily on consumption taxes. Another problem that was stated was that the tobacco industry was targeting new underage smokers. ...read more.