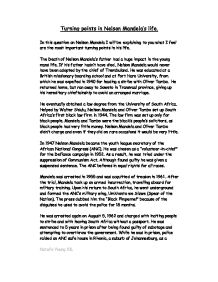 Turning points in Nelson Mandela's life. In this question on Nelson Mandela I will be explaining to you what I feel are the most important turning points in his life. The Death of Nelson Mandela's father had a huge impact in the young mans life. If his father hadn't have died, Nelson Mandela would never have been adopted by the chief of Thembuland. He was educated at a British missionary boarding school and at Fort Hare University, from which he was expelled in 1940 for leading a strike with Oliver Tambo. He returned home, but ran away to Soweto in Transvaal province, giving up his hereditary chieftainship to avoid an arranged marriage. He eventually obtained a law degree from the University of South Africa. Helped by Walter Sisulu, Nelson Mandela and Oliver Tambo set up South Africa's first black law firm in 1944. The law firm was set up only for black people. Mandela and Tambo were the black's people's solicitors, as black people had very little money. Nelson Mandela and Oliver Tambo didn't charge and even if they did on rare occasions it would be very little. In 1947 Nelson Mandela became the youth league secretary of the African National Congress (ANC). He was chosen as a "volunteer-in-chief" for the Defiance campaign in 1952. As a result, he was tried under the suppression of Communism Act. Although found guilty he was given a suspended sentence. The ANC believes in equal rights for all races. ...read more.

South Africa and the rest of the world had very different opinions on how blacks should be treated. South Africa believed that the whites were far superior to the blacks. The rest of the world disagreed, they believed in equal opportunities for everyone. External pressure was a big problem for South Africa. Although South Africa believed they could keep fighting the rest of the world, they eventually found out otherwise. The sport and trade sanctions hit South Africa hard. The trade sanctions hit the cash flow though-out the country, and the sport sanctions just hurt as South Africans loved their sports. Over all I feel that the sanctions and other political action taken by the rest of the world was a good move. Even though it hit the blacks hard to start with it helped them in the long run, with giving them their rights and freedom. Natalie Young 10L Who had the biggest role in bringing Apartheid and Majority rule to an end? Nelson Mandela or President De Klerk Nelson Mandela and Prime Minister De Klerk both played an important part in bringing Apartheid and Majority rule to an end. In my answer I am going to show you the parts that each man played during Apartheid and the Minority Rule to try and find out which one of these men had the biggest part to play. ...read more.

Negations with the ruling National Party led to the ANC's August 1990 decision to suspend its armed struggle after almost 30 years. On July 7, 1991 Mandela became president of the ANC. In December 1991, Mandela joined with the Government and other political parties to negotiate South Africa's post apartheid future. Negotiations continued sporadically until February 1993, when the ANC and the National Party reached agreements on an interim unity government in which both parties would be partners for 5 years. When I first started studying South Africa I thought Nelson Mandela was the only man who brought apartheid to an end. But through studying South Africa I found out that many people were involved in bringing apartheid to an end. Nelson Mandela and President F. W. de Klerk both had major roles in bringing apartheid to an end. Doing this research I was hoping to obtain the evidence I needed to prove who played the biggest part, but through all the research I came to one conclusion, although Nelson Mandela and President F. W. de Klerk both played big parts there were many other people involved in bringing apartheid to an end. So I think it is fair to say that although Mandela and President F. W. de Klerk were in the country suffering and having to put up with the dreadful rules of apartheid, that it was through a world effort that apartheid was brought to an end. By Natalie Young 10L ...read more.